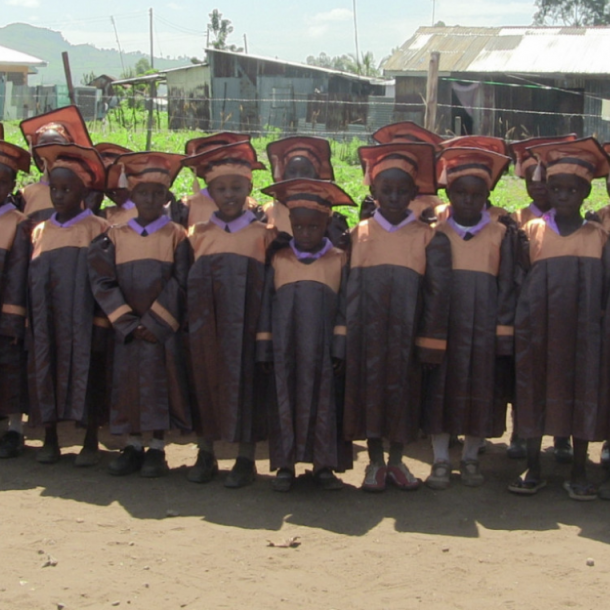 Dulo Kikkan and his wife Caroline care deeply for the wellbeing and education of the children in their community. With two children of their own, Feizer Torunn and Johnson Israel, they knew that they wanted a place where their boys would be happy and well taken care of, have the opportunity to identify and nurture their talents, and be encouraged to understand and appreciate the different tribes and backgrounds of their classmates. There were over twenty schools in their local area, but they fell at two opposite ends of the spectrum — so run down as to be ineffective and unsafe, or high-quality, but so expensive as to be unaffordable. “I saw this big gap,” Dulo says, “and felt compassion for the children.” Though he and his wife had little money, they had a vision for what a school could be — both affordable and outstanding. Working as a team, the two of them managed to scrape together the cost of tuition for Caroline to study early childhood development and education at Kericho School of Professional Studies. After graduation Caroline got a job as a teacher while Dulo, a trained journalist, worked any job that came along. They saved as much as they possibly could and, after a year, had enough to open the school that they wanted their children and their neighbors’ children to attend — Wings of Change Academy.

The Academy’s first classroom was a room in a local church, which the pastor agreed to lend to them rent-free. Using their savings to buy stationery supplies and a few desks, they then opened their doors to the public. When they first began they had six students, and Caroline was the only teacher. By the end of the year, they had sixty-five students across multiple grades and operated on their own plot of land.

“People knew about my school because of the six pupils I started with,” Dulo says. Their first six outstanding pupils exemplified the school’s core values of “honesty, integrity, faith, accountability, excellence, fairness, transparency, love, and concern for others,” as well as Dulo and Caroline’s wish that the students they cared for be “healthy, well-rounded, empowered, and responsible” as they move forward into the world. The school’s focus on strong language skills in English and Kiswahili, as well as a sense of community and belonging, made the school attractive to local parents and their young ones.  “Children wanted to come and join us,” Dulo says.

From the beginning, Dulo and Caroline wanted their school to be a gift to the community, and so aimed to be highly affordable. “The fee we charge is very small, yet we offer the best education in the area,” Dulo says with pride. Mission centered organizations, however, often find it difficult to generate the capital required for expansion and improvements. Wings of Change was growing quickly, and outgrowing its existing infrastructure. Not wanting to raise tuition, Dulo and Caroline went searching for an alternate source of funding, and in that search they found Zidisha. “A friend of mine called Denis Ngetich told me about [it]…that very day he invited me and now I am a member,” Dulo says.

In February of 2015, Wings of Change Academy’s first loan proposal was posted. Having expanded the size of their school more than ten times since opening, their original single  bathroom was no longer sufficient. Public health officials recommended they have a minimum of six. “If Zidisha can help me with this fund,” Dulo wrote, “then I can set up these toilets immediately which will be a great help to me, the children and the teachers.” They had a “great vision for this school but financial constraints have been a hindrance.” With a little help, they were set to go far.

In a matter of days the Zidisha community came together to fund Dulo’s $100  loan, allowing him to lay the foundation and set up the walls for the new bathroom. It was a busy semester for the school and their population more than doubled — one hundred and sixty children and ten staff were now using the original, too-small bathroom. In June, having paid back the first loan, Dulo posted another appeal to lenders to help purchase lumber and iron sheets for the roof,  cement and sand for plastering the walls and floor, and new doors for each stall.  This $190 loan was funded quickly, and by the time school started up again, the students and staff of Wings of Change had a new, bigger, better bathroom to use. With this improvement, too, Wings of Change was able to gain a recommendation report from the Ministry of Public Health and officially register as an educational institution with the Kenyan government.

In October the steadily growing school taught preschool through third grade, with grades being added as the original six students and their age peers moved up. In January of 2016, Wings of Change’s thirty-six third grade students were set to move up to fourth grade, but there was not yet a classroom for this level. Dulo and Caroline had already gathered bricks, sand, ballast, and rebar, but sought help from Zidisha in the immediate purchase of cement and iron sheets to finish out the needed supplies. With a new classroom they would be able to expand their student population, increasing the educational quality for all students, with an increased tuition income allowing for the purchase of better school materials.

By the December holidays the foundation had been laid and the walls built, with the roof being added on. In January the classroom was open and students were learning within its walls. It’s plastering and floor were unfinished and it’s windows missing glass, but it was functional and safe, and progress was still being made. Before the end of the semester the classroom was fully finished — plastered and painted, with a shiny new floor and glass windows. Happy pupils were learning well, and were well on their way to fifth grade.

Happy pupils abound at Wings of Change Academy. With thriving classrooms and extracurricular programs, the school is alight and buzzing with the energy of its young people. Every July students have the opportunity to take academic tours (field trips) outside of class. “Academic tours are very exciting as they expose our children to many new things.” Chartering a bus, they venture outside of their rural area into urban centers, visiting places such as “parks, airports, lakeports, zoos, and supermarkets.” While these trips are certainly a highlight, Wings of Change staff go out of their way to make sure students feel engaged and appreciated on a day-to-day basis. The academy offers football (soccer), track, drama, traditional dances, poetry, art, and debate, amongst other things. They also celebrate student birthdays with snacks and songs and create ceremony around the transition from one grade to another.

This October Dulo returned to his Zidisha page. His students were now reaching standard five and they needed a place to learn. “I don’t want them to leave school and go to other schools because we don’t have a class 5 classroom,” he said. With his new loan, Dulo sought to build a new building to accommodate rising standard four students and employ a new teacher at his academy. “I have saved some money to buy building materials, but now I need money to buy cement and pay the builders,” he told his lenders. When his loan was funded, he took to his page to thank his lenders. Three weeks later he posted pictures of the rising walls, and in early December was eager to show the progress they had made — the building was nearly ready to be roofed. By January, the standard five students of Wings of Change Academy will have a new classroom in which to learn. The gift of a safe, nurturing, intellectually challenging environment for these kids will shape their lives forever and, in turn, shape the cultures and spaces that they go on to inhabit and contribute to.

Wings of Change Academy has been operating for four and a half years now. Dulo serves as a volunteer mentor for other Zidisha borrowers, giving his time in gratitude for what the community has given to him and his family. Dulo and Caroline have big plans for their academy. They want to see it grow, keeping up with their students as they advanced in their studies. During school holidays, they are hoping to use their space and skills to train disadvantaged young people, particularly young women forced to drop out of school due to lack of funding or unexpected pregnancy, in useful trades such as “basket making, pottery, welding, tailoring, painting and sign writing, soap and shampoo making, etc.” In this way, they hope to help these young people find gainful employment and better lives for themselves and their families. They have done this once already, and “it was a blessing to so many people.”

Just last week, Wings of Change was able to get clean water piped into the school. Dulo is hoping to purchase a 10,000 liter water tank to store and distribute clean drinking water to the women in the area who do not currently have access to water nearby. “Here clean water is a very expensive and rare commodity,” Dulo says. “I wish to be of help to my community this way.”

When speaking of his town, Dulo is filled with passion. He shares photographs of houses in his community, and of the original buildings on the land, comparing them with photographs of Wings of Change today. “Maybe you will understand when I say that I long to wake up one day to see my community also live like people. Education, sacrifice, love, and passion are the only weapons I can use.”

A member’s loan to Dulo and Caroline has not only affected their lives as direct recipients, but also the lives of the students and parents of their community. If you would like to help another change maker serve their community, head on over to our loans page and fund a project.

More on Wings of Change Academy:

A YouTube video from a group of Dutch visitors: https://www.youtube.com/watch?v=jmjbYUds1Tc 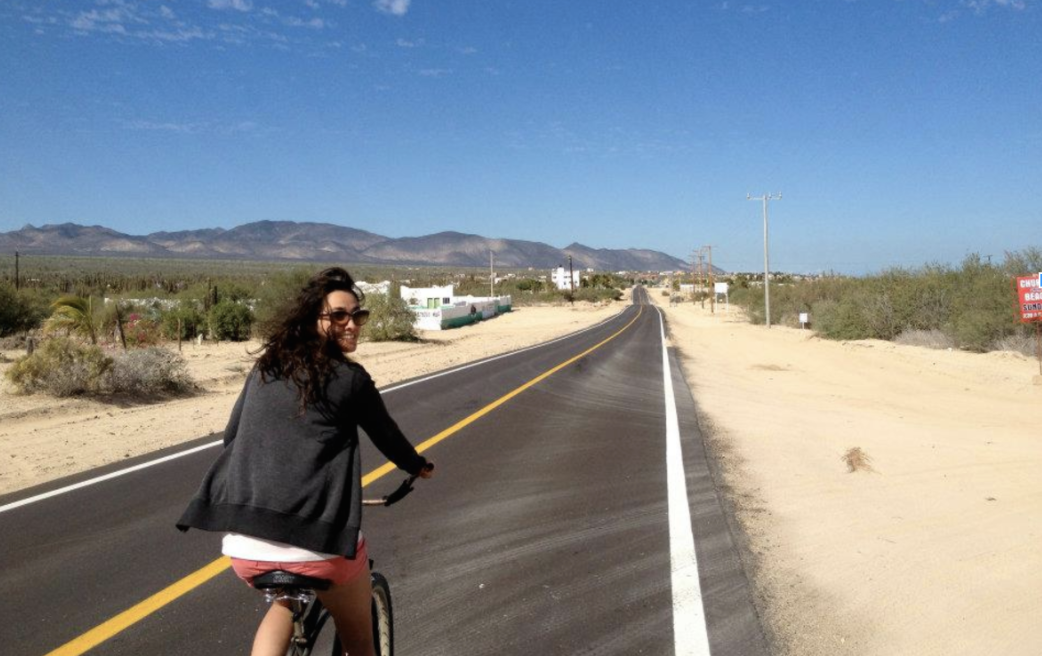