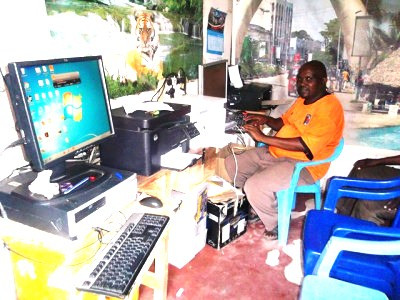 I was born in a poor family as a first born among thirteen. I used to be a my fathers family bread winner to my family from age 12 .My father had a recuring mental disorders which made him spend most time in rehabilitation facilities. I dropped out of school in 1991 due to lack of school fees. Become a hawker,By the year 1995 had not seen a computer leave alone using it, however I learnt computer skills when I was learning online Bible course in 2005 this is after the introduction of cyber services in all Kenyan postage offices. Thanks to this programme that lasted few years. From when I was born I financially struggled all through out my lifetime up 2008 when I got a grant from a friend.I decided to do computer cyber and photocopies business. From there my life changed from seeking for food only to businesses towards developments.I went back to part time classes to complete my high education. By now I have several academic papers, at present I am looking forward to join part-time course to further my education , hoping to be a part time secondary school teacher. I was displaced from Mpeketoni due to Al Shabaab attacks in the year 2014. My businesses shock.I am now resettled with my family and building up my business again. I pastor a church in the interior village . In the new lands where people are yet to be financially stable due to wild animals destroying their crops and poor environments. personally I have been an adult education teacher for three years after the same programme made me complete my high school education .My children are so ambitious some want to be armed forces others teachers and not forgetting the pilot.

My businesses deals with Photos - taking and processing digital photos from cameramen,passport size photos, photocopies documents,typesetting laminating, ,internet. Due to a big number of churches,schools and young people need of photos I get people or customers to serve. I was among the first people to learn computers education here and in the process I realized very few people are aware about computers and paperwork services. The cost of working material is cheap and for the reason that I service my computers alone I have an added advantage.I use the income to further my education and that of my children's, I will be effectively be able to take care of my elderly mum which is a responsibility entrusted to me by my late dad who left in the year 2012 .I still expand my business by establishing new same business branches in other towns where there is potential for development. I buy land to build my permanent home in near future.I am a curious person full of ambitions.

I have been constructing an iron sheet wall construction which which will finally cost 80,000. I have already built the best part of it which costed Ksh 50,000 after which I stopped due to lack of money. What remains is the roofing,painting and the floor. This building will cost me 4000 less per month than what a rented building could cost. I am planning to extend my computer services businesses to that corner of the town. In this place hope after five months time it will increase my net income by 15000 per month and put me in a position that I will be able to employ one more person who will earn her living there. By the time being I will be paying my loan with the already established photo studio.

Ask Jeremiah a question about this loan project, share news and photos of your own, or send a simple note of thanks or inspiration.