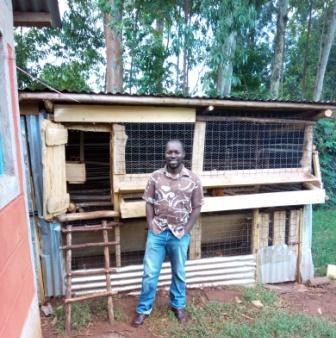 Have really grown, Born in 1981 in a rural area named Manga scheme in Nyamira county of Nyamira County - Kenya. Married to a lovely and supportive wife Catherine blessed with two Kids, in July 2016 I lost my little sister who had a 8 year old daughter. We decided to take her as our own. Now we are parents to 2 beautiful girls and 1 handsome boy. The girls want to be doctors so we can be treated at home while the boy wants to be a police officer to arrest all those who mistreat the mum.

After my primary and secondary education I joined Thika Institute of technology for a Diploma course in Information technology for three years. I later got a Job and worked for 5 months without pay. But then on a positive side I gained experience on various things (computer repair, networking and installation).
In 2007 a friend loaned me two computers and from savings I started a cyber café which has grown to over 15 computers today.

In March 2014 a friend introduced me to Zidisha and I was awarded 150 dollars, which I brought webcams. My profit margin grew and I got new clients, Have made more friends from my list of clients.
In life have learnt a lot of lessons. Of late my 1st and only employer is one of my best client. Sometimes we Joke how he never paid me even after making alot of profits on installation for him.

At first (2014) my cyber café offered services ranging from provision of internet services, computer services, Networking and installation, Phone application installation and later after receiving loans from zidisha, The cyber is far better then when it started. It now owns a two photocopy machines, Bbetter printers, a digital
camera and a generator machine all brought from funds and interest loaned from Zidisha, the profit margin grows dispute the daily challenges

PROFITS
I hired a 1 acre land for 4 years (starting Jan 2015) at a cost of ksh 7000 per year. in this land have been planting maize and groundnuts and it has an added advantage since i don’t buy maize flour any more (Form the profits i brought building materials).

Have also been paying school fee per year, something that was impossible before.
I started a poultry project which had a few challenges, when I started it was a little hard since I was buying the feedings but since the chickens are laying eggs now I don’t have much problem in feeding them plus am getting eggs for my family and a little. profit to add up to the cyber business.

Hi Lenders this is your boy Joshua seeking a 3rd loan. Let me first thank you for the two previous loans, With those loans i can say am somewhere now. I can pay my bills on time, take my family out once a month and more so pay school fees for my daughter on due time. Thanks

Am here again seeking my third loan. During the Green card season, I hired a digital camera @ 20 dollars for a month, I made a few clients and contacts, I signed two contractors for January to make student's id. I thought it'll be cheaper if i brought my own Camera and printer.

With the Camera and printer, I'll be able to take and print passport for students,clients applying for jobs and others, Previous i have had parents who had Birthday parties and hired me to do the photo session which i sub-hired out, With my camera and printer i'll make some profits and improve on my current income.

The printer will also help alot those clients who print colored documents in the cyber.
I hereby ask lenders to fund this project i promise to pay back on due time without letting you down.

Thanks in advance.
Joshua

Ask Joshua a question about this loan project, share news and photos of your own, or send a simple note of thanks or inspiration.