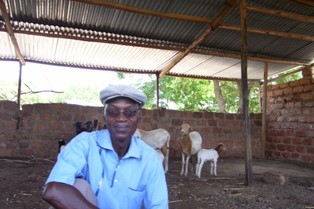 I am from Burkina Faso.
As far as my education is concerned, I am holder of a Brevet Supérieur d'Etudes Comptables, a secondary school diploma in Accounting. With that degree, I developed skills that allowed me to draw up balance sheets and summary of accounts of companies.
With that background, I was awarded a scholarship from French Mission d'aide et de coopération (MAC). After my degree in Economics with concentration in Business Management from Université de Nice in France and courses from Institut d'Administration des Entreprises (IAE) in Paris Dauphine (the reduced program), I was hired at the Régie des Chemins de Fer Abidjan-Niger (Ivory Coast) where I became the Unit Head of Accounting Services from 1974 to March 1976.
After I applied for a job posted by Hotafric, a branch of the multinational airline Air Afrique in charge of the promotion of tourism in member states, I was recruited as the Head of the Department of Administrative and Financial Affairs.
In 1977, Hotafric was dissolved following the withdrawal of Gabon from Air Afrique and its branch. All Hotafric employees were absorbed by Air Afrique in its Headquaters in Abidjan where I spent the rest of my career until Air Afrique was also dissolved in 2002. I held various positions namely,
- Head of Staff Accounting Services;
- Head of Industrial Accounting Services (airplanes maintenance in particular);
- Head of Finance Department;
- Head of General Accounting Department;
- Assistant to the Director of Finance.

I did not ask myself what would be the next step after Air Afrique closed because I already knew exactly, before starting my career, where I was going to land at the end of it. Indeed, at an early age, I enjoyed agriculture and livestock farming with my parents.

I saw my father getting up very early in the morning, a hurricane lamp in his hands, and finding his way to his farms to pull up weeds. He would come back by 6:30 GMT to get ready for his work as the gardener of the White Fathers of the Major Seminary of Koumi (West of Burkina Faso, 15 km away from Bobo-Dioulasso). The small salary he received was nothing compared to what he made from his cereal, oil-seed seed and vegetable crops. Everything was there: small millet, maize, white and red sorghum that my mother would use to make dolo, a local traditional beverage; peanuts, sesame, beans, and groundnuts. During the lean period between planting and the first harvests, our relatives would come from our home village of Reo (west of the center of Burkina Faso) and even from the city (Bobo-Dioulasso) to harvest grain for free.

In the 1950s, global warming was not yet an issue. Winter season was from April to September. With holidays starting end of June, we used to do farm work for at least two months while attending classes. I would come back from school at 5:00 pm and go to the farm to chase away partridges who were eating the crop seeds. At twilight, when they would go back to their nests, I would return to the house and make sure all of the poultry were back to the henhouse, otherwise I had to look for them.

My mother was a shepherd for a long time (well beyond her 20s) because, according to her parents, she had baraka for livestock farming. As a reward, when she left the pastures to get married, she received a bull and a cow that she left under the care of her maternal uncles. The livestock from that pair was my heritage to be. My professional obligations and being far away from my country (I spent my entire career in Abidjan, Ivory Coast) did not allow me to go with her, despite her wishes, in order to be introduced as the heir of her livestock. My mother died in 2004. She was 96 years old (officially, but she was older than that according to witness accounts and historical markers). She went without realising her wish. But, even if I missed the physical inheritance, I received a much more secure intangible one. My own love for livestock farming made me hope I could do it myself and fly even more higher than traditional livestcok farming.

When it became evident in 2001 that my employer Air Afrique would not survive, I acquired 13 hectares of land in the region of Burkina Faso where I was born. In 2008 I increased my landholdings to 15 hectares on two sites.

MY LAND
On the first site, with an area of ​​13 hectares, I grow cowpeas, maize (corn) and sesame. I also built a covered enclosure for livestock measuring 12m x 5m.
On the second site, I also grow corn and cowpeas. I also built a 14m x 5m barn for livestock (in which I appear in the photo). This site, with an area of ​​2 hectares, is surrounded by barbed wire. It also has a large diameter well with reinforced concrete to a depth of 17m. This well does not fail in the dry season.

PURPOSE OF THE LOAN APPLICATION
Since late 2012, the price of mutton and goat meat increased overnight from 1,250 CFA francs per kilogram to 2,500 francs CFA per kilogram, under strong demand from Ghana.

I request the loan (the amount is a must because my ambitions are from another dimension), to allow me to fill my pens with young kids and goats and to buy animal feed in addition to the natural food grazing. During the winter season the goats are confined in pens so they do not damage crops. Goat feed includes corn bran, cottonseed meal, flour néré (a tree savanna pods contain seeds and concurrently an edible yellow flour), salt, and at the beginning of each month two sachets of vitamins (Olivitasol). The natural food is available locally in the uncleared part of the farm.

Young goats costs around 8,000 CFA francs at the age of four months. They begin to reproduce at around six months of age, bearing two or three kids at a time. Two months after breeding begins, the number of heads in the pen will double. The first ten goats will produce at least ten kids. The result would depend on the proportion of female goats in the herd.

A veterinarian will monitor the animals and prescribe necessary vaccines and treatments. The vaccine costs 100 CFA francs. As for the possible treatment of diseases, medications are provided and billed according to the condition.

The ten female goats may be sold after their offspring are weaned (4 months after birth) for 225,000 CFA francs. Until they are sold, costs for maintenance, depreciation and supervision of the enclosure, will be around 154,000 CFA francs (15,400 x 10).

MY AMBITIONS
My objective in the short to medium term is industrial goat-raising. This does not exist in Burkina Faso. I also want to drill a well and install a drip-irrigation system on two hectares of my land to produce even in the off-season.