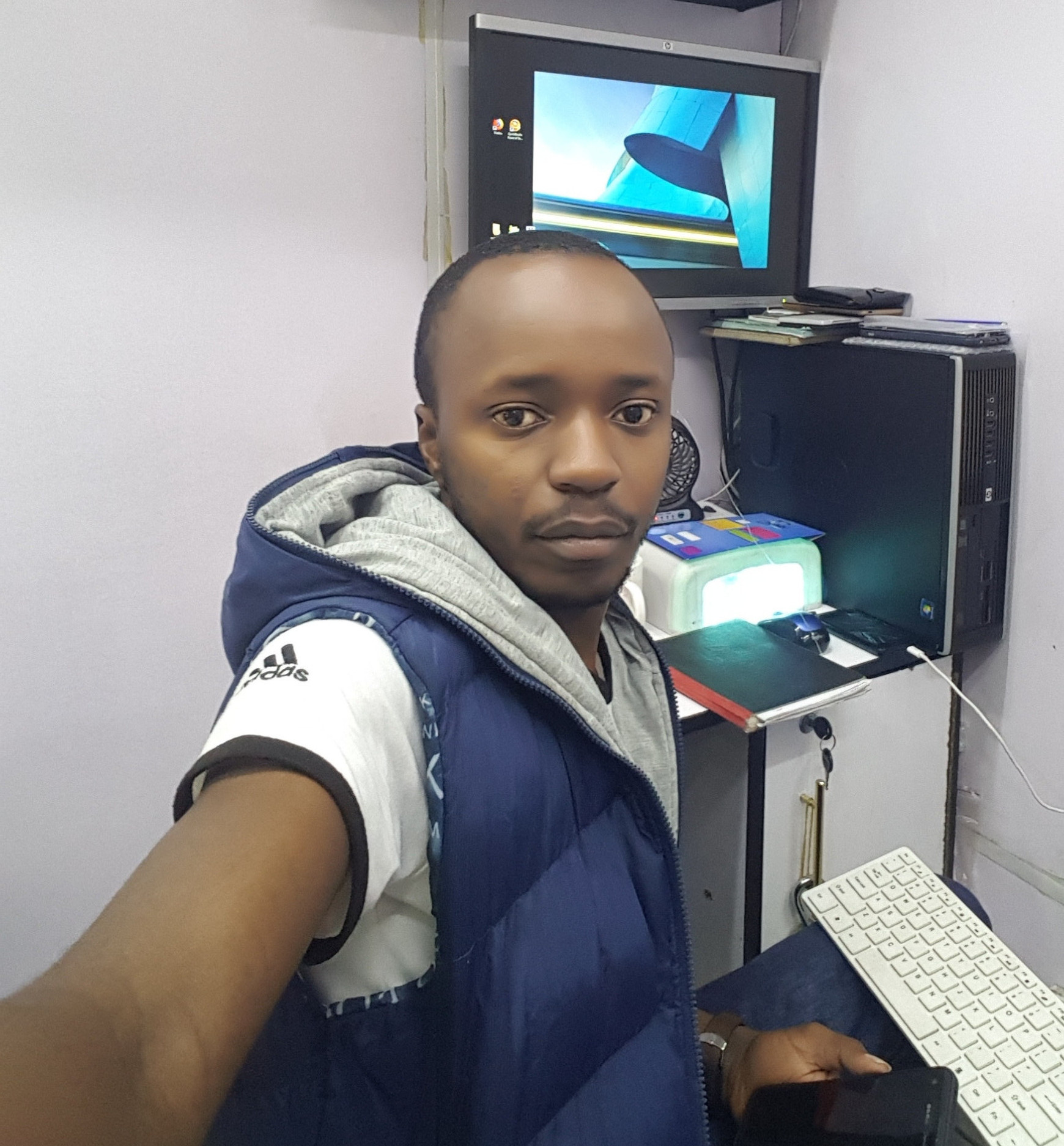 I was born in Karingari, Nembure sub location, Embu District, now Embu county on 6th January 1991. I am the last born in a family of three boys. I went to Nembure Primary School in my locality and later joined Kangaru School. Due to lack of school fees I was transferred to St Christopher mixed day Secondary School. In 2010, after high school moved to Nairobi where I first worked as a messenger for a real estate management company. After one year I joined hands with my cousin and opened a movie shop in fedha Estate. After some months of poor performance my business partner gave up and wanted the shop to be sold. I agreed to refund him the money he had spent in monthly installments. After several months of struggle I had cleared his debt. The business had already peaked but the worse happened, due to expansion of Outer ring road in Nairobi we were issued with a vacation notice and I had to transfer my business
After that I secured another business room in November 2012 and set up my business, this time round I had made some expansion. I had phone accessories and electronic good like sub woofers. A month later, on December 12th my shop was robbed off everything. This literally paralyzed me. I worked as a free lancer for some months then in 2013 April I started an electronic shop in tassia where I run up to date.
In the year 2016 I set up another business but it was vandalized during the post election demonstrations. Am currently working on another shop in Nairobi Cbd where am dealing with phone spares. Hope all goes well. Thank you.

I run an electronic shop based in tassia. I sell Phone accessories, bulbs, bulb holders,head phones, USB cables among other products. I also deal with electricals such as wall sockets, wall switches and wires.
So far i have acquired loan five times. With the first three loans i have been able to add more stock to the shop. I purchased sub woofers and DVD players. This has really boosted my monthly income by more than 60%,all thinks to the zidisha team.
I also started dealing with cooking gas cylinders courtesy of the forth loan of kes 43500 with i used to buy complete gas cylinders with gas and also constructed a lockable metallic grill cage for security and display purposes of the cooking gas cylinders.
With my previous loan, which was the fifth one I was able to purchase television sets and some other minor things.
The business is now performing well but I believe with even more stock and variety of products it can perform even better beyond expectations.The market around is favorable for such a business but enough capital is a major hindrance to development
The main costs involved are the licenses and the rent, the others are minor e.g electricity bill. The profit raised is used to cater for my basic needs, take care of my parents, help the needy where I can and use the rest to add some stock

Hello lenders, since my last experience with setting up a business along the highway didn't turn out to be the best, I decided to look for greener pastures in the heart of Nairobi. I secured a place in a stall where we share with my friend and split the monthly rental charges. I decided to venture into selling mobile phone spares such replacement screens, charging systems(plates and ports), sim trays, power and volume keys, glass back covers and phone housings.
I was motivated by the fact that almost every kenyan above the age of 15 years has a smartphone regardless of whether its high end or just a budget phone. While I was in my business in tassia I could loads of people requesting for phone repair services which I didn't offer. I considered Nairobi CBD area due to the high number of people from different part of the countries and also accessibility of spares within the town unlike outskirts.
Due to shortage of capital, i decided to begin with importing spares for the budget smart phones like tecno, infinix and wiko. I began my activities in town around July and since then I have made contacts with some Chinese suppliers and I have been able to make to two purchases from them. In the first consignment, I acquired sim trays and charging systems worth Kshs 50,000. In the last order I was able to purchase LCDs replacement screens worth Kshs 139,000. I spent around Kshs 150000 on this purchase including freight and clearing charges.
I have made another order and the invoice has been sent to me via wechat. In this order I intend to add sim trays, fingerprint sensor replacement, on demand LCDs, on demand charging systems and phone housing for variety.
I intend to apply for a loan of kshs 130,000 from Zidisha to complete my order which is short of kshs 115,000. I will the remaining balance of kshs 15, 000 for clearing charges. I will attach an image of the invoice below because the break down will be too long.
I greatly appreciate your assistance and commitment in uplifting the lives of us upcoming business people. Am honored to be a borrower of zidisha. Thanks once more

Ask Dennis a question about this loan project, share news and photos of your own, or send a simple note of thanks or inspiration.