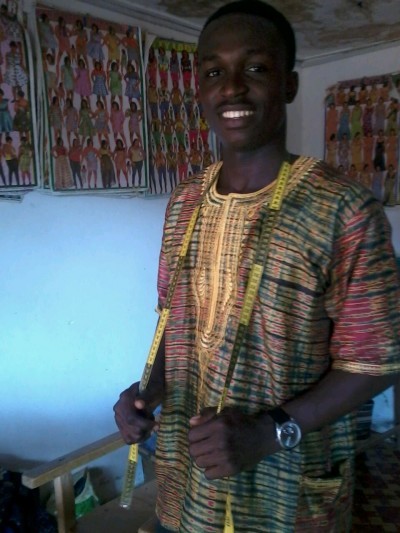 My Story
I am Amissah Okai Felix. I am 26 years of age, dark in complexion and moderately built. I come from Berekum in the Brong Ahafo Region of Ghana. I am in a family of four and the last son of my parents. I had my primary and Basic Education at the Berekum All For Christ International School and furthered at Pope John’s Senior High and Junior Seminar in the Eastern Region of Ghana. I am a self-employed. I produce African wears and Designs .I entered into this business due to my grate love for the Arts industry and see it as my God given talent. Over the few years of my practice, I have been able to produce various designs and wears from different cultural backgrounds. My hobbies are reading, drawing and playing computer games.

BUSINESS PROPOSAL
I started my African wears and Designs shop in the year 2010 after having undergone a three –year apprenticeship at Jobo’s Designs and Decorations Services. I opted to African wears and designs due to my fundi interests in the Arts industry.I started operating my shop with a base capital of about 400 dollars but by God’s grace it now values over a 1000 dollars.
Berekum is strategically located at the central part of Ghana and is noted for its trading activities.In view of the trade,most people from different parts of Ghana do come to trade.A by part aspect of the trading is the mixed cultural integration relating to coping different ways of dressing.It was paramount therefore to capture this grate opportunity by designing various indigenous wears People prefer my products to others due to my ability to blind modernity with the old traditional styles.
I intent to open up my business to grater height due to high demand of my products.Despite the flourishing nature of my business,there are challenges which hinder the smooth production of my works.My rented workshop space is too small to accommodate myself and my other four apprentices.Also I intend opening another branch to display my works to the public.I therefore plead with Zidisha to come to my aid with about 3000 dollars to help build my own workshop,buy electric machines ,fabrics and acquire a store to display my products.People prefer my to buy my African design shits due to the quality of my shirts.I also move from government institutions such as hospital, Banks,Schools,and other offices to give my products on credit bases.This has increased the demand of my products to my customers.
REPAYMENT
I will be able to repay the loan facility given to me from the daily sales I make from the sales of my products.

I will use the requested loan amount to buy industrial machines for two professional whom I have employed to help in my shop.I will buy two neating machines and one holes machine.Aside the machines,I will use about 500 dollars to buy fabrics and use the remaining amount of about 1000 dollars to buy the machines.This will help me improve my work and meet the demands of my customers especially the coming Easter.I intend linking with friends in the United Kingdom and The United State Of America who has expressed interest to sell some of my products there.
I hope to this will increase my profit greatly.