Add a new breed of high-yielding sheep to my flock 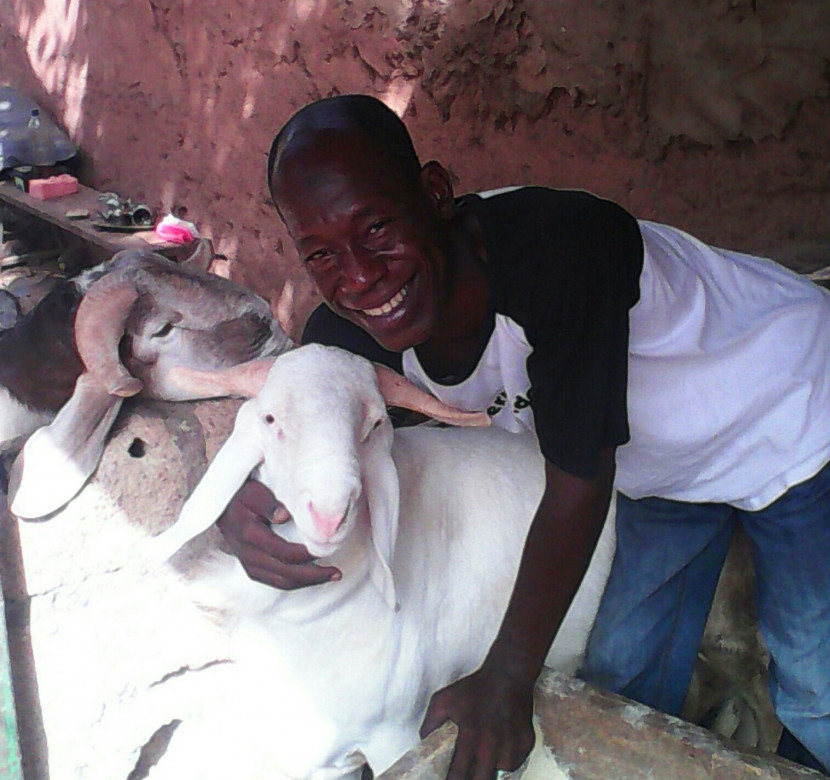 I live in a family of eight. We all get on perfectly well with each other and fight together for success! I work in a company created by an association of disabled people.

I like animals, and I have a project of raising animals, which necessitates funds.

That's how, with only my salary, I bought two male and one female white sheep. Then, I started to renovate two warehouses, but the second one is not finished yet because of the lack of wherewithal.

I already have three purebred sheep, and I'm planning to extend the herd because there is never enough meat. This is just the beginning of my project of sheep breeding. In time, it will grow, evolve, and become more profitable. In Burkina Faso, the demand for meat from sheep undoubtedly will be high, especially during sheep festivals.

This particular breed of sheep is really nice to breed. They are pretty big, though, and so they are expensive. I would not be able to buy a sheep of this breed with $100; however, with that amount, I could fix the second warehouse to protect them from the rain.

Maybe I could get a field in my village to establish the farm I've always dreamed about.

I chose to become a shepherd because the demand is higher now than in the past, and it keeps growing. Moreover, after my retirement, I would be able to live from my herd and, if everything goes as I imagine, I could create new jobs to decrease the unemployment rate.

I will use one part of this new loan in breeding another type of sheep, more expensive and also more profitable than the one I am currently breeding. A three to four-month old ewe costs around XOF 250 000.
I will invest the other part of the loan in tea business, especially as the rainy season is coming. It is the time of the year when Burkinabé drink more tea. For the later business I'll work with my friend NIKIEMA RASMANE, also a member of Zidisha, with whom I have a good working relationship.
This loan will help us increase our supplies (and so get quantity rebates) to satisfy the demand which is currently surpassing supply.

I live with my family of eight, in which there is perfect harmony and together we are fighting to succeed! I work in a company created by an association of disabled people. I love animals and beyond the love for animals I have a breeding project that requires a lot of money, and as I have a lot of money why not start a little to come thither. Thus from my salary I have bought two males and a female purebred sheep all white I realize two hangars which the second is not complete due to lack of financial means.

I have three breed of sheep with which I intend to enlarge because the meat is never enough! It's just a breeding project which start in the coming time based on changes could give more profit and will increase over time. In Burkina Faso it is on there will be a strong demand especially hanging the period of the festival of moutons.J
This is a breed of sheep which always gives pleasure to raise and more is sheep large gauge and expensive. With 100 dollars I do not pay a little sheep that race but I could complete the hangar number 2 for shelter from the rain soon in Burkina Faso. If I have more money I could have a field in my village for my firm I want to heart! I chose this project because the breeding livestock demand is stronger and will not ever decrease on top of that after I retire I could live more I hopefully as I think I could create other project more with it and decrease chaumage rates.

Ask Souleymane a question about this loan project, share news and photos of your own, or send a simple note of thanks or inspiration.