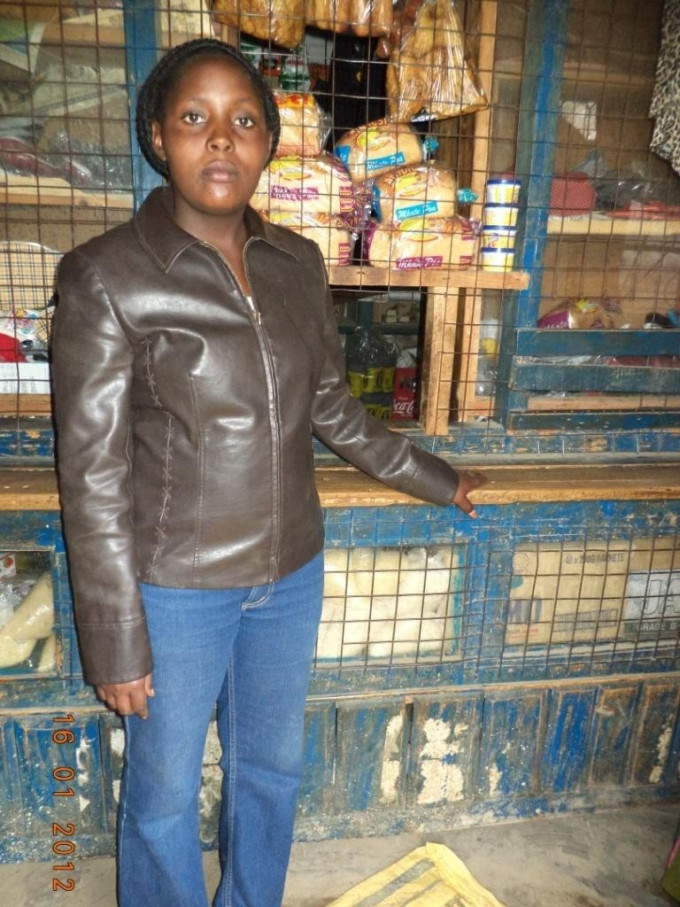 My names are Teresiah Nyokabi Simei. I am a Kenyan lady by birth. I was born in 1989 in Kajiando district where I was brought up by my parents together with my brother and sister. I later joined nursery school at Olesangale nursery school where I done my exam and performed well. I later went to kajiando primary school. In 1996 we migrated to Naivasha where my father was working with Home grown flowers wile my mother was looking after her goats and cows together with my younger brother. Due to lack of school fees I dropped out of school and I was helping my parents with domestic work and later I was employed to Nini farm where I was working as a general worker. I worked for around 5 years and then I thought of a small business which was a kiosk. I had to make a lot of profit.
At the age of 20 we met with my husband where we got married and we were blessed with a first born who was a boy. My husband was a shop keeper at Karagita shopping center and by then I was looking after my son without doing any job. After my son was 2 years I thought of doing something else.

My husband gave me 10,000/= Kenyan money where I was afraid what kind of a business I will start, but I had to think as a wise woman what you can do with such kind of sum. I thought of which my last business in my mind with the sum was a small business. I looked for a good area to fix the business which it took me one month and two weeks to find a good site. I started the business which runs very well. After a short period of time a friend of mine told me about a group by the name Mwanga which was ‘a may go round’. We were providing 500/= Kenyan money each every Sunday within 5 months I had 10,000/= where at the time my husband job was too down where I boasted him with 3,000/= to stock his shop where the remaining I bought a goat which have gave me a lot of income each every six month.
After seven years I joined Naivasha Environmental Health Initiative {H.E.H.I.} where I was taking my savings after two weeks. I had to save according to my income. While doing my business my husband and I had to work hard because our son was now at school and it was a private school. After some years I was able to save and I applied a loan of 100,000/= Kenyan money which was a return with 8,000/= each month. It was my first loan which enabled me to buy a cow of 40,000/= which also gave me some income. I pushed up with the loan well until when I was able to pay all the sum that I was suppose to pay.
But for every human, you have to get a big vision so that you can create a better tomorrow for your family and including you also. For now I think of a big business which is farming. I think of having new equipments, have an irrigation scheme as in Naivasha the weather is not favorable. The reason of this is so that I can be a good farmer without depending for climatic conditions. And that why am asking Zidisha to help me in this.

having bought one cow with the first loan.i want to add another so as to get more income from milk that i will be selling.i also want to add stock to my shop which am sure i will be able to meet all my customers needs.i will also be able to employ a shepherd who going to be taking my cows for grazing.

Ask Teresiah a question about this loan project, share news and photos of your own, or send a simple note of thanks or inspiration.