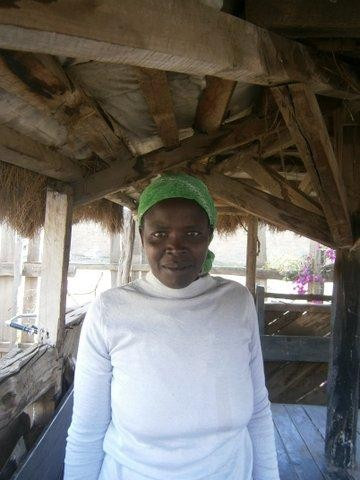 My names are Joyce Wambui Kamau ID NO 11617952. I was born in 1973 at Maiella, Naivasha Division in Nakuru District. My parents are the late Bethuel Kamau and Regina Njeri. I am the second born in a family of eight children. In the year 1981, I was enrolled in class one in Maiella Primary school where I completed in the year 1989 and got my Kenya National Examination Council certificate. After that I joined Njoro Girls Secondary School where I dropped in school due to lack of school fees, that was so pain full from me being a drop out. In the year 1992 my parents migrated from Maiella due to crashes where we come and settled in Naivasha. From that migration, that was my worst of my life because my parents had no enough money to sustain us, so we survived in a miracle way due to that we left from Maiella to Naivasha with nothing at all only our lives. Later on they were forced to such for employment where they were employed in the flower farms. For myself I would not stay idle at all where I decided to move around looking for any job house to house. It was so hard for me to do so but I was forced with no alternative. In 1993 I was joined a private sector where I pursued a dress making course. In 1994 I started working as a dress maker. In 1996 I changed my mind and got employed at Homegrown Kenya Limited in Naivasha where I worked as a general worker

In the year 2002, I had invested 50,000/= Kenyan money which I used as my capital to start business. I started farming and poultry keeping. Due to climatic changes I had to have farm challenges although poultry were doing better. So I changed my mind and left farming while I decided to start buying goods and selling them in the market. It brought a good hope to me thus I bought a dairy cow as I continued with market work. I moved on well but by time I dropped my market job due to lack of goods. As I was going on with what I had left that is poultry and grazing, I was encouraged by my friend to join NAIVASHA ENVIRONMENTAL AND HEALTHY INNIACITIVE{ N.E.H.I.} where I was boasted with a loan of 110,000/= Kenyan money which I paid the loan according to their instruction. I have been so happy with N.E.HI. as it has improved my life from nothing to something. With all that I have some visions with my business. I want to have a big firm of poultry where by doing this I need more capital and that why I requested Zidisha to help me with the raising of my dreams. Thank you.

Having raising poultry keeping and cow farming I want to add more so as to get more income from eggs and milk due to the market is very high and I am not able to satisfy my customers. If Zidisha give me this loan I will be very gland while I will make more jobs to the youths while I will give them either feeding programmers i.e. caring for chicken or to be in the market selling the products. Thank you Zidisha as you continue helping my dreams coming true.

Ask Joyce a question about this loan project, share news and photos of your own, or send a simple note of thanks or inspiration.