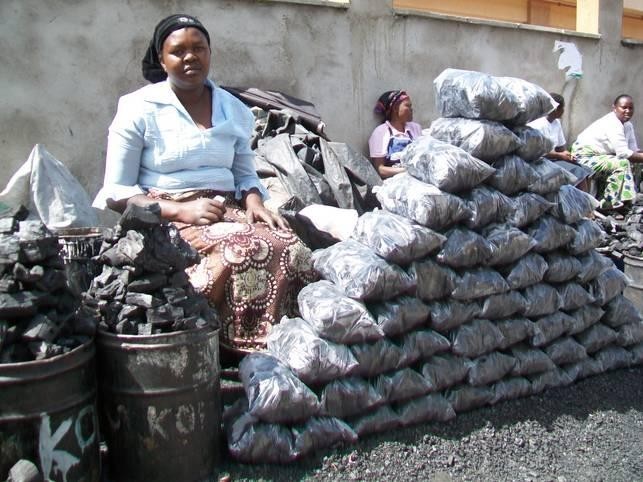 My name is Elizabeth Wambui, born in 1978 in Nakuru County in the Rift valley. I am a second born in a family of four. I underwent my primary education in lower solai in nakuru and later joined Lake Nakuru secondary School. I am single with two children one who completed her secondary education in the year 2012. I started selling Charcoal in Kiserian in Nairobi, then I was selling charcoal to kiserian town residents. Later I relocated to Kitengela where cost of operation was low. From my previous charcoal business, I was able to purchase a plot in Nkoroi area near Kiserian and constructed four room residential houses. I have rented this rooms though they are are still incomplete therefore the rent income is abit low. However they have been of great importance to me since I was able to educate my daughter up to form four level. The income from my business was also used for family upkeep and helping my parents back home. I also have interest in farming and have been doing it in my home place where i have rented a 1 acre of land in bahati nakuru and have been planting wheat and tomatoes and the returns are encouraging.

The main product i sell is Charcoal. The demand for charcoal here is on the rise since its affordable to the population around. With a group of about three, we hire a lorry that transports the product rom Narok where we obtain the the charcoal at a lower price. Charcoal is sold in bags and a bag goes for Ksh. 700 from the supplier. the same bag I sll it at Ksh. 1500 minus Ksh 150 per bag that I pay for transport. this brings a profit of about Ksh. 650 per bag. I also sell the same in small quantities and this is where its more profitable than selling in whole sale. A bag may result to about Ksh 2000 when sold in small measurements. In a good day, I can sell up to five bags while in other days i can selljust one. On average I do sell about bags at average of Ksh 1000. This translates to an average income of about Ksh 40000 per month and after paying all the expenses (Rent, security, labour e.t.c) I have about Ksh 20000 which is Net profit and I use the money to pay for my family upkeep, school fees and the rest to savings account. I am not the only supplier of this product. we are about 5 in the neighbourhood and most of the time we work together especially during purchasing so that we increase our bargaining power and reduce the cost. I have my regular and permanent customers whom i even deliver the product to their homes so that to maintain a good relations and make them loyal.

With my third loan, I to concentrate much on wholesaling. Our major supplies are from Narok County, this will require adequate storage space and adequate finance to cater for both bulk purchasing and transport. Currently I have a semi permanent shed that I have been using for both retail and wholesale. I have identified a trusted person who will be in charge of retail as this is more demanding since most customers buy a bag or less.
While out there, I want to deliver as much as I can to those customers that so far rely on me. I have once delivered to far places like Limuru and Kinangop. This however can be more profitable if am delivering more bags as opposed to few since overhead costs are high. I am exploring possibility of soon delivering regularly to far places like Limuru and Kinangop and Naivasha after I obtain the licence to do so. I have confidence in this business having been in it for long and I am aware of the challenges. Also I have made several long term customers who are reliable. My future plans are to acquire own means of transport as transport costs reduce profit margins. I am hopefully that with your support, this initiative will be a success.