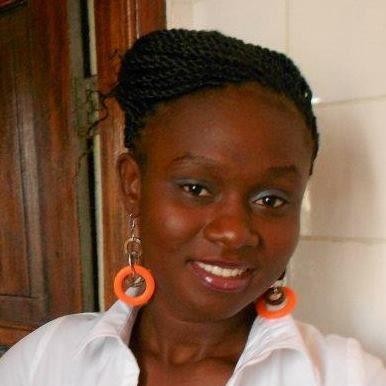 I am Winifred Boamah, a Ghanaian and a graduate in Swahili and Political Science. I am from a family of eight and the oldest of my siblings. Am currently doing my national service at University of Ghana, Legon-Accra. I love to learn other languages because I believe language breaks all forms of barriers and the limited number of languages one has acquired determines his or her limitation in the world.

I am a young lady who is aspiring to become an entrepreneur in order to contribute to the socio-economic development of my community and encourage and support new start-ups in my Region and Ghana has whole.

My small-scale business is basically about the buying and selling of Kente Clothes. Kente cloth - has its origin with the Ashanti Kingdom, and was adopted by people in Ivory Coast and many other West African counties. It is an Akan royal and sacred cloth worn only in times of extreme importance and was the cloth of kings. Over time, the use of kente has become more widespread due to the prestige attached to it hence increasing the demand for the cloth. However, its importance has remained and it is held in high esteem with Akans as well as Africans in the diaspora.
As a business strategy,I sell out my Kente Clothes to individuals, students, and government workers at a relatively lower prices and this has attracted a high demand for my goods.
Despite the high demand for my Kente goods, I am financially challenged and would like to use this platform for a loan to expand my Kente business.

"KENTE" is a brilliantly colourful fabric, entirely hand-woven by Ghanaian weavers. The brilliant colours and intricate designs associated with Kente have definitely made this fabric the best known of all Ghanaian, and perhaps even all West African textiles. Every design has a story with a proverbial meaning, giving each cloth its own distinction.

Women wear the cloth in 2 pieces - 1 piece about 2 yards long and 45 inches wide wrapped round the waist to form a floor-length skirt worn over a blouse specially sewn in plain material. The other Kente piece was either hung loosely over the arm or used as a shawl or stole.

Men wear the cloth in much the same way as the 'Toga' was worn by the ancient Greeks, and it would seem that these ancient people must have been in contact centuries ago.

My business is predominately the sale of kente clothes to government workers at a competitive rate and this has greatly affected my customer base over the few months. I started with the sewing of kente into dresses at for all ages and this has been positive and I would need a loan of $600 to expand this new business Venture.
I am apealling to all Lenders to help me make this happen and promise to repay the loan from my earnings. Thank You.

Ask Winifred a question about this loan project, share news and photos of your own, or send a simple note of thanks or inspiration.