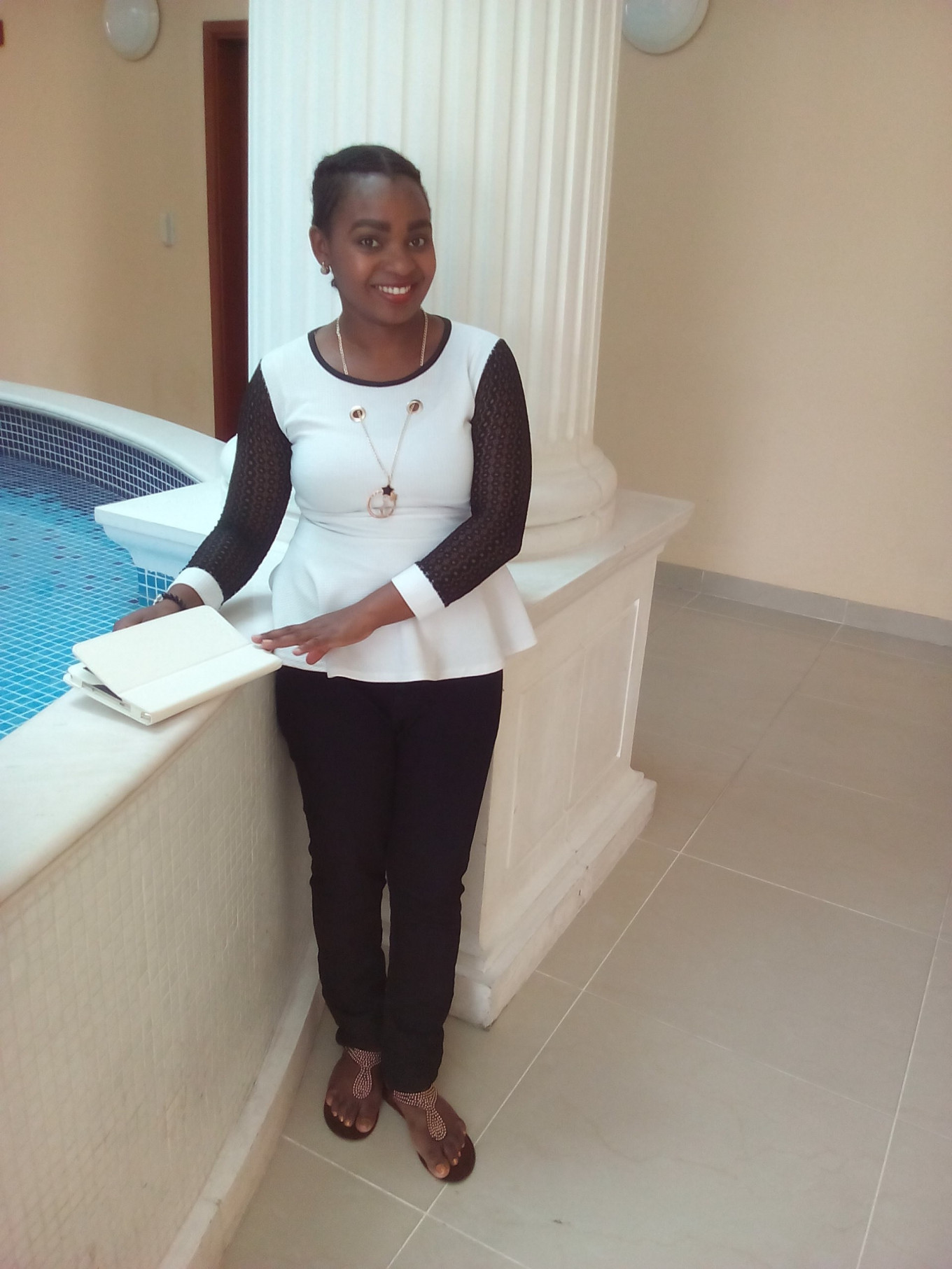 Having grown up in the central part of Kenya in a family of 8, farming was the major activity at home hence at a tender age I was introduced to cultivating and looking after the cattle after school and during holidays which was an interesting thing to do since I could join up with other kids to play round games in the field and also hunt. As a young girl I always aspired to be a graduate when I grew up but the dream was crashed when I finished school and there was insufficient resources to go to college hence I had to search for jobs to try and raise cash to go back to school but due to low wages, I used to live hand to mouth for about three years when a well wisher identified me as someone who was not contented with her the then current lifestyle and status. The old woman saw me to campus.
I graduated from Jomo Kenyatta University of Agriculture and Technology with a bachelor’s degree in IT in the year 2012. This I must say was a great stepping stone in my life and I was so grateful to God for allowing me a chance to go for higher learning. Being one of the few graduates in the village, I am always passionate about empowering young people in the community and for that reason after graduating I volunteered for one year to work with young girls who are finishing high school in Butere community; Western Kenya to mentor them socially, intellectually and spiritually.
I have always wanted to be my own boss and with the help of my entrepreneurship skills and being an outspoken person, I boldly ventured into urban farming last year whereby I am doing poultry farming, vegetables and rabbit keeping with the support of my family.
I love baking and pastry, freelancing and interior design. I look forward to being a successful business woman and a home maker some day.

My farming business is approximately 2 years now. I begun with poultry farming; Broiler keeping to be precise and when i realized it was successful, i decided to expand it by selling the idea to my parents who boosted the business by increasing the stock. Today i rear a variety of chickens that is broilers, layers and indigenous chicken. I recently ventured into rabbit rearing since there is a ready market in the supermarkets and 5-star hotels in Kenya. Eating healthy with chemical-free vegetables led me to begin cultivating Spinach and kale whose demand is high locally where very few people in the urban area do farming. Finally i recently began freelancing in order to advance in the area of my career that is Information and Technology.

I chose farming since with foods you can never go wrong.

I have invested $ 1,744 in my business. My monthly income is $291 which i generate from vegetables and 100 broiler chickens. I expect to leap my first income from my 21/2 months;200 chicken layers in March when they will start laying and i expect to generate $523 monthly and $116 from rabbits quarterly. I am expecting my first pay of $50 from freelancing in two weeks time. My expenses go up to $174 and I remain with a surplus of $117 which i reinvest into the business.

If i successfully qualify for a loan, i am going to increase the number of birds up to 1,000 which is my target for the next 12 months. This will allow me a gross profit of up to $ 105 daily after selling 30 tray of eggs. Meanwhile with the first loan I will increase the number of birds by buying 3 months old;20 layers chickens at $4 each adding up to a total of $81 and the remaining $22 I will top up buying of feeds whereby a 70kg growers mash goes for $32 and 200-250 pullets consume a 70kg bag within 7 days.

This kind of empowerment will allow me a chance to go back to the community and empower young people in becoming financially independent by venturing into entrepreneurship. i look forward to your positive response.

When i receive this loan i will ho and book 250 day old broiler chicks ftom the hatcheries which will be ready for collection within one week. One chick costs Ksh. 60 and rearing the same chick to maturity costs Ksh.250.

The chicken will be ready in about 5 to 6 weeks where we sell them in a ready market. One chicken is sold at Ksh. 340 hence giving a profit of Ksh. 90. I will also add 5 drinkers at Ksh. 350, 5 feeders at Ksh. 300 and one chicks cjarcoal jiko at Ksh 1500. The remaining money i will use it for emergency purposes since broilers require a lot of attention.This will enable me to comfortably service my loan and expand my business.

I look forward to having you lenders lend me again.

Ask Gladys Nyawira a question about this loan project, share news and photos of your own, or send a simple note of thanks or inspiration.