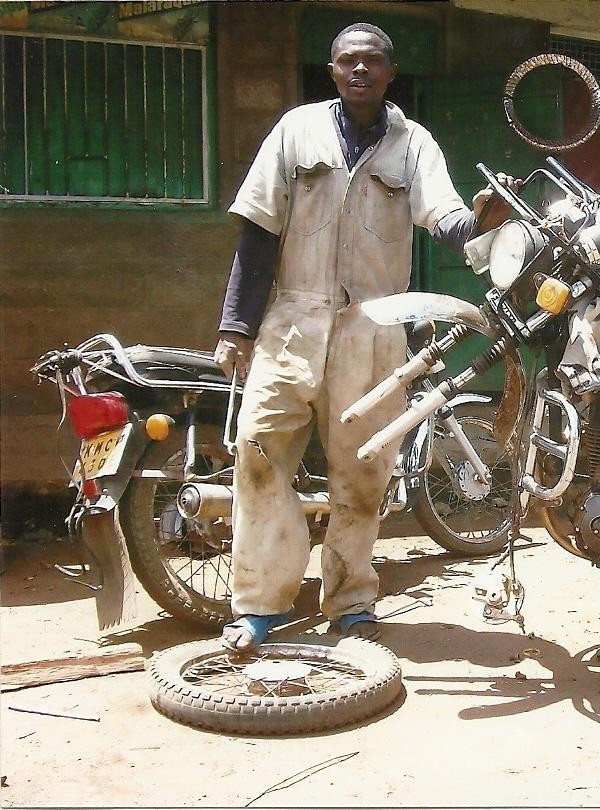 My name is HENRY MWANGI NDIRANGU. I am married with three children. My business is situated at Karunga Shopping centre, from Nakuru/Nyahururu road as you reach a centre called Maili Saba. You branch to your right take a rough road go past St. John’s secondary school, then from their to Karunga Centre. I live at Bahati Scheme, 2 KM from Karunga Centre. If you ask for Baba Ndirangu you will be brought at my home.We live in Karunga centre where we boarder the bahati forest and so the place is very productive due to the rainfall through out the year.

I am a mechanic (motorbike repairer) I have garage by the name MWERERI GARAGE. I also sell motorbike spare parts e.g rubber tubes, clutch cables, rings, spotlights bulbs, break shoes e.t.c. Is a good business since in our area motorbikes have become the best economical, efficient mode of transport. Due to lack of unemployment youth have engaged in a business of carrying passengers to and from the village(boda boda) Due to rough road many bikes get problems and there I get business by repairing them. From my business I get about Ksh. 30,000 per month that is Ksh. 360,000 annually. Risks that my business faces are rain and hot sun shines and lack of some spare parts since I am far from Town centre.

Hello Zidisha lenders. First is to thank you for the loan you have been giving me. I have been doing well in my business with your Help. This is my third loan which i will Buy Motorbike spares and add to my storck at my Shop of selling Motorbike spares and repair. I will pay My loan with profit i get in my Business. I have more customer due to my considerable prices and offer of good service. Thank you as you give your bids.