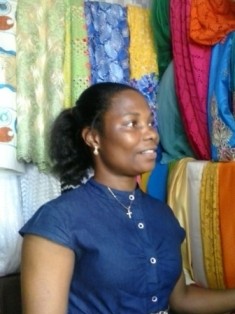 Material for my clothing & material shop

My name is Mary Boateng. I am 37 years of age. I come from from Bechem but resides at Fiapre, near Sunyani, the Brong Ahafo regional capital. I happen to be the first among five sibblings. After my Secondary School education at Bechem Presbytarian Secondary School, my parents attention was shifted to my young sibblings. I really had to struggle to enrolled myself at Rhema Polytecnic to do a diploma in Business (DBS) course. These situations gave rise to a pursuit of busniess and marketing in order to survive.

I was introduce into business at a tender age . However, after my secondary school education, it became clear that I had to pursue business with all the seriousness if I wanted to better my lot. After several years of struggling in business, I settled on clothing and material sales. This is what I have been doing for the past Six or so years, from a little begining of selling two used cloths to a material and cloth shop. I currently have traditional and foreign materials in my shop.

I happen to find hope after several years of 'going round in circles' in business, I settled on clothing and material sales. From a little begining of selling two used cloths to a material and cloth shop, I pursue with seriousness my new found dream of selling cloths. I currently have traditional and foreign materials in my shop. My Business is picking up, and I have hope that, with the injection of money I will increase my profit margin. I believe with the help of Zidisha, I can scale the heights in business. I wish to apply for $800.00 to buy more goods for my shop.

Mary opted to pay $95.21 into the Zidisha Members Loan Fund in return for a higher starting credit limit.