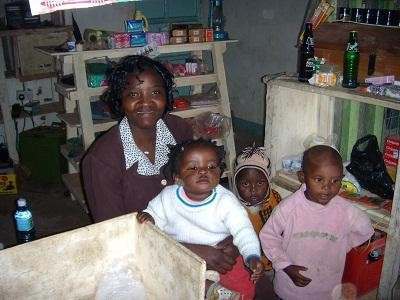 I am a Lady aged 28 years. I am married with one child, a girl called Gladys. my husband is called James. He works as a teacher. I live with my family in a place called Kianjoya which is approximately 40km from Nakuru town. Until November 2009, I used to work with a community based organization called "matumaini HIV/ AIDS control group". My responsibility in the group was to analyze data and to present it. I also served as a receptionist in the organisation. The organizations activities were affected after the donors withdrew their fundings. In January 2010 I started operating a general shop. The shop was located in a shopping center called mitimingi. I later on sold the business this decision to quit the business was arrived at by My husband and I.

since then I started the farming business. At first we were growing maize and beans just like the other farmers. The income from this activity was not good. most if the time we would incur huge loss .

My husband and I decided to try something diffrent. We started attending agricultural seminars and field days. During one such a seminar we learnt about greenhouse tomato farming. The idea was very promising. the main problem was how to get the irrigation water.

We immediately started digging the underground tank. most of the digging was done by labourers but we
also participated in the digging. the cost of labour was approximately ksh 25000.

we at the same time constructed our first greenhouse.

at the moment we have three greenhouses. measuring 6*52m, 8*15m and 8*30m. The greenhouses are made timber, nails and pplastic sheets.

The greenhouse farming has proved to be a very potential project . It has helped My family to undertake various projects .

My intention is to improve My water harvesting ability. To do this I intend to align a dam liner on My underground tank.

A dam liner is a plastic sheet that is placed at the walls of the underground tank. This prevent water loss through infiltration.

According to a dam liner expert, the cost of fixing the liner is ksh 145000. Currently I have managed to put aside ksh 70000. My husband has also promised to give me ks30000 towards the program.

With the loan I will be able to raise all the money needed to place the dam liner.

Ask Wanjira a question about this loan project, share news and photos of your own, or send a simple note of thanks or inspiration.