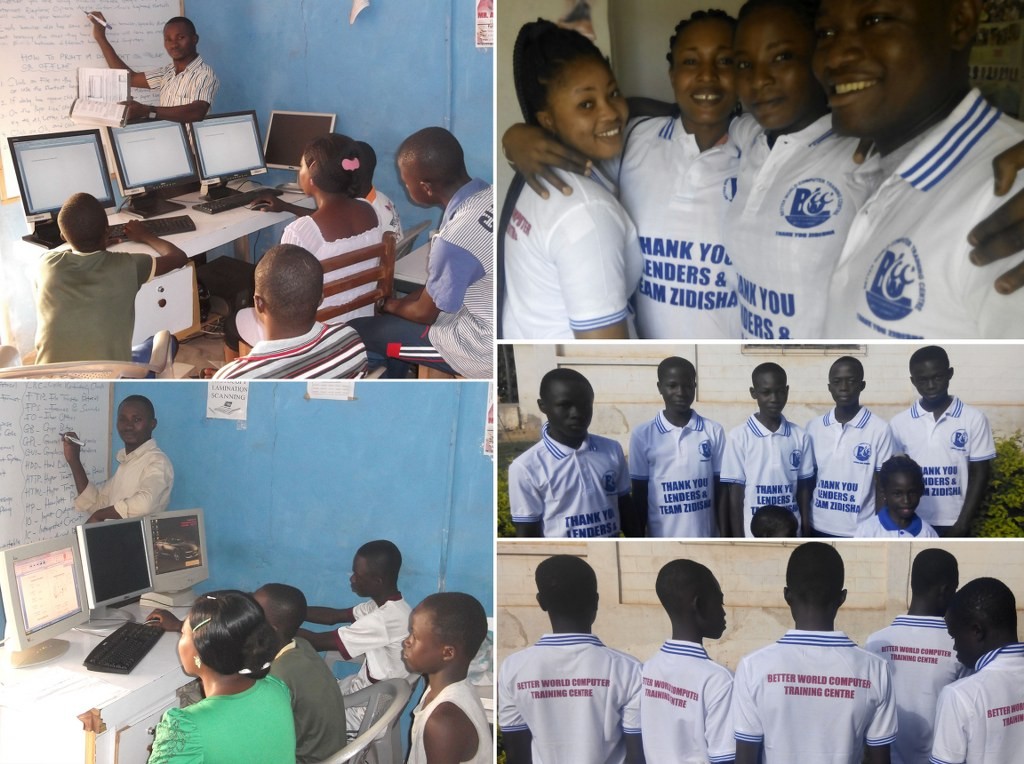 Awudu Yahaya is my name. I hail from Berekum in the Brong/Ahafo Region of Ghana. I attended Yamfo Vocational Training Centre (Y.V.T.C) from 2002-2005. I then pursued further studies at Sunyani Polytechnic, where I was awarded a Computer Science and Technology Certificate. By reputable Zidisha and dear Lenders support, I am now pursuing a Distance Learning programme in BSc. Information Technology (I.T.) at the Kwame Nkrumah University Science and Technology, Sunyani Centre. I am the Director/Instructor at "Better World Computer Training Centre" in Berekum. I have six siblings and happen to be the first-born of my parents. Playing computer game, listening to music, reading news online, and watching movies are my hobbies.

After completing Polytechnic, I decided to establish this computer school in Sunyani, Brong/Ahafo Region. Eventually, I rescinded that decision because I realized that my people at Berekum were more computer illiterate, because they didn't have any Information & Computer Technology (ICT) training centre, then. How to even handle the mouse was a problem for them. I was then inspired and motivated by the elders in the community to set up an ICT training centre in the year 2010, with the name “Better World Computer Training Centre”. The main motive was to help my own people get access to ICT. I started with five (5) computers and one (1) Uninterrupted Power Supply (UPS) to cater for unexpected power outages or low current. The patronage was very high because many parents within the Berekum vicinity and nearby villages brought their wards to be trained. Mature individuals also developed interest and came in numbers so as to broaden their horizons in terms of ICT skills. As I speak, the centre is well-known in Berekum and its environs, due to the better services we do render to our learners and clients.

The establishment of the ICT training centre has helped the community in diverse ways.
First of all, money can be saved because it is much quicker to move information around. With the help of ICT, it has become quicker and more efficient to contact either a business or a friend or a family member. They now can correspond with anyone around the globe by simply text-messaging them or sending them an email. It also has created new jobs for the people. Probably the best advantage of ICT has been the creation of new and interesting jobs. Computer programmers, systems analysts, and ICT teachers are just some of the many new employment opportunities created because of ICT. Moreover, computers, along with their programmes and the Internet, have created educational opportunities not available to previous generations. All these are manifestations and clear indications that the ICT centre has been helping people in multiple ways. The ICT training centre is highly patronized by learners paying their fees impressively.

After completing the building I will re-register the Centre name from the “BETTER WORD COMPUTER TRAINING CENTRE” to “ZID-LEND COMPUTER TRAINING CENTRE”. “ZID”-may represent ZIDISHA and “LEND”-may represent LENDERS. If God permit I will do so a lot for others to know how Zidisha and Lenders brought me from a deep darkness into the light. Also, every learner must get one computer in order to facilitate teaching and learning. Unfortunately, the computers are not many for me to teach them well. Other relevant tools such as modem, Modern printers, scanners, photocopiers to mention but a few are also limited in supply making a big challenge to effective teaching and learning of ICT.

In view of the aforementioned challenges, I wish to write to your noble organization Zidisha and dear Lenders to come and support me in order to enhance effective teaching and learning of ICT. I know the word Zidisha means “grow” or “expand” so I have a strong believe that reputable Zidisha and respective Lenders will surely support me to grow my business. May God bless you all for your wonderful support. Thank you.

Ask Awudu a question about this loan project, share news and photos of your own, or send a simple note of thanks or inspiration.