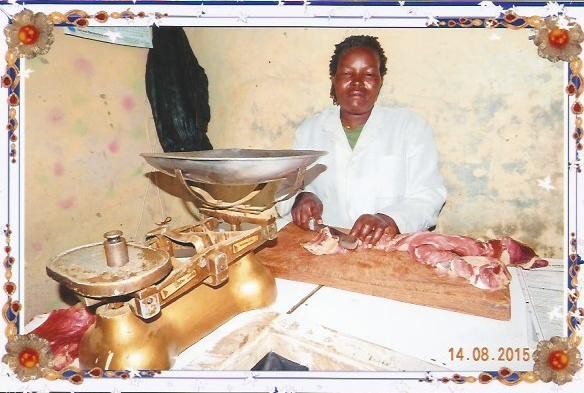 Am called Esther Atieno born in the year 19888 on 13th of august in Kajulu village in Kisumu county in Nyanza Province in the beloved republic of Kenya.
I went to School in Kindu Primary in the year between 1992 to the year 1998,and stop there at that level due to lack of School fees because my parents were very very poor that they could not afford any thing apart from ]daily meals which was also a challenge to them as well.
Then latter I started working for people as A gardener in my tender age and I earned a very small sum of money and I used that to begin my Butchery which am running till now.
I am married and have Four children and all of them are boys ,The first born is in class 'six and the second born in class four and the third born is in class two the last born is still in the house he is about two years old .
I overcame all these hardship after I worked hard and earned money to begin my own business which is now helping me and my family.

The unique thing in my m,y clan is that girls are not considered when is comes to distribution of wealth by the parents but only boys are considered.

All my children to become business men wen they grow up except the last born child who is still young and has not decided .
My hobby is singing and swimming in my free time with my family.

I provide Butchery services of which I sell all kind of MEAT to my customers at the same Butchery.
This kind of goods is useful and are in demand because one people are so many in this place of kamukunji and two my neighboring community are pastrolists ,they keep a lot of cows ,goats and sheep therefore they are not so expensive to purchase from them and slaughter and sell the meat to the customers.
I chose this kind of business because the cows and sheep and goat are cheap to purchase and they available around the place ,
My typical cost and revenue is 40,.000Kshs.
I use the profit I get from .my business as follows .
-School fees for my children 12,000Kshs.
-Reinvestment in growing the business is 2,000Kshs.
-Home improvement 8,000Kshs.
-Church activities is 2,000Kshs.
And I expect more to be done soon as the business grow.

If am given this loan amount I buy 2 goats at 50 Dlollars.
this will make my customers like my butchery shop because I will all the verities of meat in the same butchery shop.
This will give me more profit in the same shop.
if this is put in practice then I expect 50% increase in my business.

Esther opted to pay $112.11 into the Zidisha Members Loan Fund in return for a higher starting credit limit.