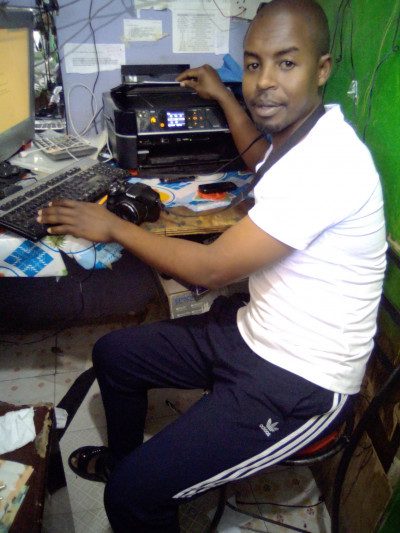 My names are Josphat mwiti from eastern side of Kenya in Meru county,I am 32 years now married with two children .I am first born in a family of five,my dad died 9 years ago after a short illness when i was in form 3 and my mum who is peasant farmer continued paying my school fees which was hard for her but we were assisted by my local Methodist church in the village.After i did my final exam, i came to Nairobi city to look for a job and i was employed as a loader and i was able to help my mum to cater for my 2 sisters and 2 brothers .I also saved small and bought 5 second hard computers and in July 2014 i bought a small hp desk jet printer 1551 a second hard as on my photo and a hp 3 in one printer 1512 and i started my small cyber and money transfer services (Mpesa )in the Estate[NE TECH CYBER CAFE AND PHOTO STUDIO ]the name of my cyber where i offer services like printing ,typing ,laminating,binding ,photo printing and PC games for children.I also offer computer packages training but under someone college name because i have not registered my cyber as a college but is in the process by June 2015.I my self love computers ,i went to a college and did an IT course ,from there i interacted with more learned peoples especially my mentor in business who teach me a lot including basic computer repair,formatting [software and hardware] and business management. I love children's ,that's why i gave them opportunity to play on my PC but in future i will buy play game station.I live a neighborhood being a slum (KOROGOCHO) where some peoples lives is not good.I want in future to see my children living a good live and be future business peoples.My vision is to teach people entrepreneurship through IT. . By that i think there will no cry of unemployment in Kenya and entire world.

My business is mostly MONEY TRANSFER SERVICES (MPESA) A PHOTO STUDIO AND CYBER CAFE where i offer COMPUTER SERVICES like typing ,printing ,games and internet services.I also offer computer basic training for both young and old by what one can afford to pay e.g one can pay through affordable installment as agreed.Other services include online government applications like payslips,ticketing ,k.r.a pin number,passport application and driving license and more.
Computer services ,training is in demand because schools are around and my cyber is at the entrance of the estate,also schools make photocopy more demand.I choose this business to help society and make profit to help my mum to educate by brothers.In the last nine months my profit has increased by40,000ksh[400 ($) US DOLLARS] per month which is 70% growth monthly . I have used this profit to expand my business with the help of loan i get from Zindisha lenders and pay school fees for my brother.For now want to introduce sponsorship for computer training in my cyber for less able like the slums boys and girls and also to the street children because i live within a slum.MY GOD HELP ME.

Hello lenders,when i get the loan i will use it to buy an Epson Px 660 3 in 1 printer which is capable.of printing passport and photos direct from phones,cameras,USB, memory cards e.t.c.This printer is approximate 4500 Ksh(450 dollars).

The remaining cash will be used to add float on Mpesa, Equity and cooperative bank agent. This will add more profit to my business as it will be bringing a 7,000 Ksh (70 Dollars) a week equivalent to approximately 21,000 Ksh (200 Dollars) a month.

The profit that i will be getting will help me paying back the loan on time and also help in paying my son and the daughter school fees.Also it will help me cater for my Mum who is widowed back in rural areas.

Kindly lenders,do lend me again to pursue my dreams.

Thank you very much.

My business mainly is for money agency ,in Kenya money agency is one of the crucial business which will remain opened during this time because we are bank agency and government is giving priority to cashless money transaction.
I have Mpesa (mobile money agency) Equity and Cooperative banks agency.
some of the transactions are ,deposits,withdraw,paying bills e.t.c.
I do also computer services,now that students are all at home I am offering Exam printing and photocopying as schools are sending exams online at a lower cost.

Ask Josphat a question about this loan project, share news and photos of your own, or send a simple note of thanks or inspiration.