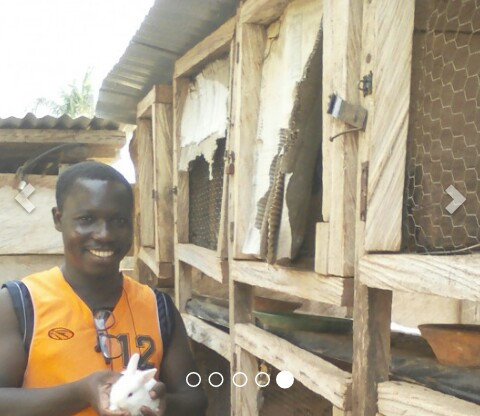 i am twene quardjo charles a native of Seketia a small community in jaman north district of brong ahafo in Ghana , west Africa. i completed basic education the year 2004 but due to financial constraints i coudnt further my education . in the year 2013 i entered into cashew farming and rabbit rearing. i now need financial assistance to expand my rabbit farming .Because of it nutritive value of fat .people have now turn to rabbit meet more day in day
out due high demand of the meat and also less cholesterol in its meat.The area I live is well known in Ghana because of the production of cashew nuts. The area is call jaman north district in Brong ahafo region of Ghana. The area is also known for production of yam and it's district capital ( Sampa) proximity to Ivory coast. The area is famous for deep ascent of the Twi language.

i do rear rabbits simply because the cost ant the rate in which t people demand it is very high due t the low fact people have now turn to chose rabbit as compare to fowl because of high fat .now the rate in which the people demand and how they buyers them is very amazing as because the eat weed s it is very easy to real the because it does not demand a lot o money ton start up this business.Rabbit has low fat as a result of it alot and most people now depend on rabbit meat .the petronization is very good as a result of its low cholesterol in its meat. The animals are now producing at an alarming rate. Because of the dry season fresh leafs to supplement the diet are hard to get so dey consume a lot of the process feed.this has increase my operation cost a bit but increase in demand has help me offset the additional cost.I will entreat my colleagues to enter into this business.

I will used the money to buy some roofing sheet because some of the places are leaking.and more over some too.I have decided to buy wire mesh too now the cost$200 and I have decided put light in the pen so I cost of wiring for electricity$100 and I will expand the pen too.now the cost of the woods are more costly$25.

Ask Charles a question about this loan project, share news and photos of your own, or send a simple note of thanks or inspiration.