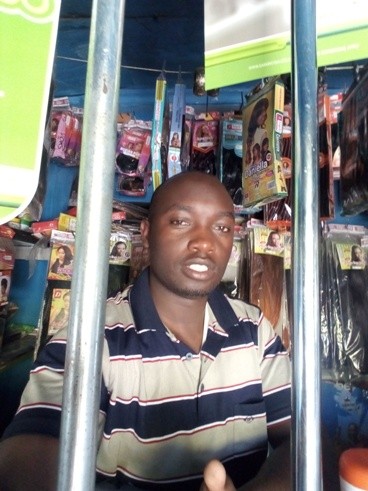 My Names are Harun Mwangi Wamae, Married man living in Nakuru County in the city called Nakuru. I completed my secondary school in the year 2005. After this, in the year 2007, I joined a college in Nakuru city where i took a computer engineering course. After the completion of my course, I was employed as a teacher in the same county as college teacher but afterward i decided to diverse my education by joining a university and pursued a finance course. After completion i was employed and after few months i came up with an idea of saving and starting a business in order to boost my monthly income of which i managed to open a salon after 8 months out of the saving i had.

Apart from My salary, i have a salon business combined with cosmetic and M-pesa where my wife works of which we want to expand the business. The business started as a small salon out of the saving i had from my salary of which it has grown to an additional M-pesa and a Cosmetic and we believe out of your support we will be able to expand it to a bigger one of which it has started to reveal itself after several loans that has been extended to me through Zidisha which i have been comfortably serviced with the income i got from the products i bought. The business is able to make an average gross of kshs 70,000 translating to a net of about Kshs 34,000 prior to loss that i used to make in the beginning because i was even forced to dig back into my salary to support the business in paying some of the expenses. The income has shooted to a net of kshs 34,000 as per the last month of which out of it i was able to pay kshs 4200 per week toward my loan. Currently I managed to shift to a more spacious room and added one more employee.

Hi lenders, my dreams stands and i believe with your support i will achieve my goal of which it has strongly started to reveal itself . I still want to expand my business more inorder to create more employment. Out of the applied amount i want to boost my Mpesa float with Kshs 80.000 inorder to make sure that no one comes in for any transaction and left unattended be it deposit or withdrawal. The rest i also want to add more stock of the things that after evaluation most customers kept on asking in my cosmetic though we were unable to purchase. Am looking forward for your funding. Thanks in advance

Harun opted to pay $119.61 into the Zidisha Members Loan Fund in return for a higher starting credit limit.

Ask Harun a question about this loan project, share news and photos of your own, or send a simple note of thanks or inspiration.