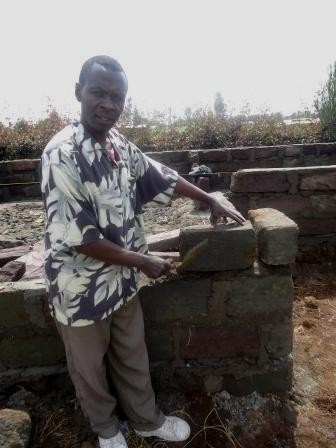 Born 1961. Started the school in 1973 to 1979. I join secondary school in 1980 to 1983 at Jomo Kenyatta secondary school. After school I join casual masonry where I was trained how to build stone houses. I am married with 3 children, a boy and 2 girls.While i was aged ,i used to play Foot ball and volleyball as well.Before i was born, my parent were living at Central Kenya where they were tought Agikuyu culture.My mum was tought on how to cook Githeri which is a composition of maize and beans,while my Father was tought on how to graze sheep's.When we were born ,we also underpart the same as our parent does.

After being trained as a masonry, I decided to depend on myself. So I take contracts or sub-contracts and I employ people. After finishing any contract I pay the workers and other expenses as far as the building is concern and what remains support my family.Due to increase of population ,there is need of building descent mansionel so as mason,i used to build of my best so that i may gain more customers.During young age ,i used to visit constructions whenever it taking position.I use my profit to expand other business like Dairy cafe which is learned by my wife.The rest i use to cater for my children school fees.

Benard opted to pay $83.04 into the Zidisha Members Loan Fund in return for a higher starting credit limit.

Ask Benard a question about this loan project, share news and photos of your own, or send a simple note of thanks or inspiration.