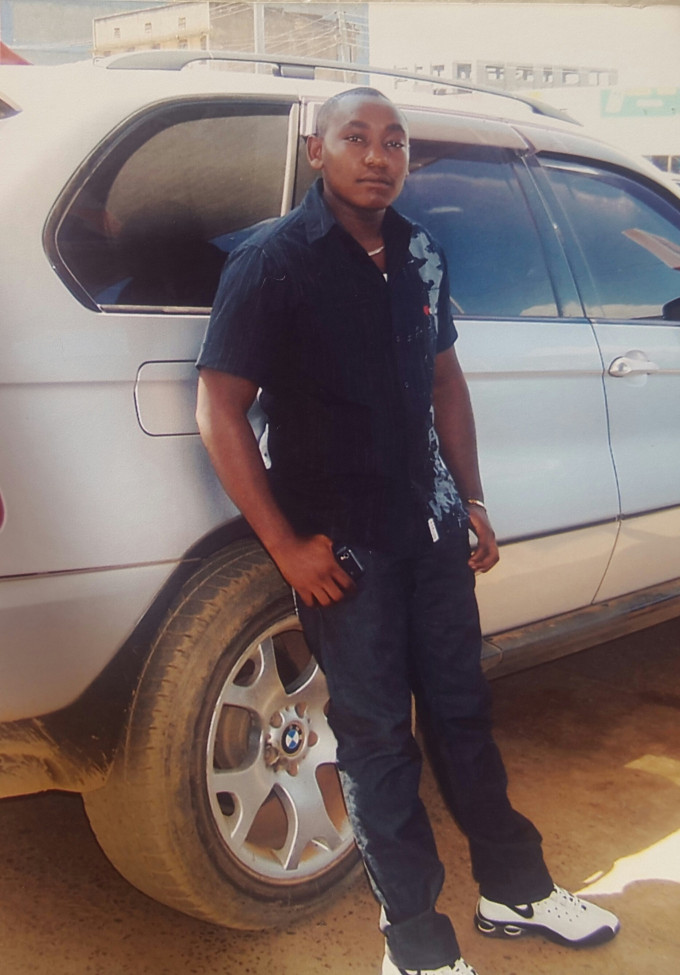 My names are charles Nderitu Thuku last born in a family of six. I was born in the year 1987 august 14 in central part of Kenya. I went to lemok primary and then moved to kakamega primary that is in western were my elder brother was employed as a driver. I moved to kakamega because my mother was not in a position to pay for my school fees and at that time my parents had separated. My mother later on passed. After primary I joined Ingotse high school were I completed my O'level. I later joined Nibs college which I dint complete for lack of fees. I started working as a turn boy loading building materials on the lories. In 2009 I decided to go back to western n start a small business. I bought compact disks(movies) at a wholesale price of sh 20/= each which I sold at a retail of sh 50/= each. I did that for almost one year but due to the county council demanding for permits I had to drop the business. A friend of mine offered me a job to be his conductor . I would look for clients to board taxi and at the end of the day earn something for my stomach and some small savings. After two years I was able to get my first loan from one financial institutions and was able to partner with one of my friends to buy one second hand car which we used as a taxi. I could work during the day as he worked at night. By then I had gone for driving school and qualified. After sometime we sold the car and shared the money equally. I was able to buy my own though not on cash but I always worked hard to pay the difference. I am now married with one kid my wife used to sale clothes but due to expansion of the roads the stalls were demolished. Still looking for somewhere to put up the business.

I do car hire and taxi services here in Kakamega town. Initially I operated a small boutique which my wife was running but due to expansion of the roads the stalls were demolished but I was lucky to get another space were I have set up a motorcycle spare parts shop. With the little savings I have set from my other business which Zidisha has been my pivot the business is doing great.
I chose this business because most people in this town use motorbikes as a means of transport because its cheap and convenient and thats were my spare business comes in. In this town we have over ten thousand motorbikes and i can tell we have not more than ten shops though we have three big ones which the owners import the spares directly from china were we small retailers we go and buy from them. (Looking forward to that too)
From the profit I make am able to restock my shop as well as pay school fees for my loving daughter.
From my shop am able to make upto 70% profit everymonth.
At the same time I also get around ksh 70000 from my taxi business from which am able to pay for the monthly instalments for my car and the other twenty thousand I add stock to my shop and do small savings.
Thank you all.

Thank you Zidisha for this golden chance.
With the ksh 59564, I will be able to do a major shopping for my shop which has not been doing that well the past months.
First am going to get a number of tyres. One tyre goes at a wholesale price of 8 dollars from my shopping list av listed 20 tyres which will cost 160 dollars.
I have also listed engine blocks at least 10 of them for different bikes, three for each bike one goes at 20 dollars that means I will need 200 dollars for the engine blocks.
My stock also lacks Tvs and Bajaj dashboards which goes for 8 dollars each. For ten peaces five each I will be required to have 80 dollars.
The other items I need are headlights, indicators, side mirrors, piston kits, Piston rings, connecting rod and tubes from all that I have done a rough calculation it comes to a total of 200 dollars and my shop will be complete again and be able to serve my clients well again and be in the competition.
The challenge here is when a client comes to my shop and he or she doesn't find wat they need next time they won't come to ask they assume you dont have everything they need.
Thank You again for being their for me and may God keep you all to continue giving support to may other young and old entrepreneurs like me to meet their daily needs. Thank you.

Ask Charles a question about this loan project, share news and photos of your own, or send a simple note of thanks or inspiration.