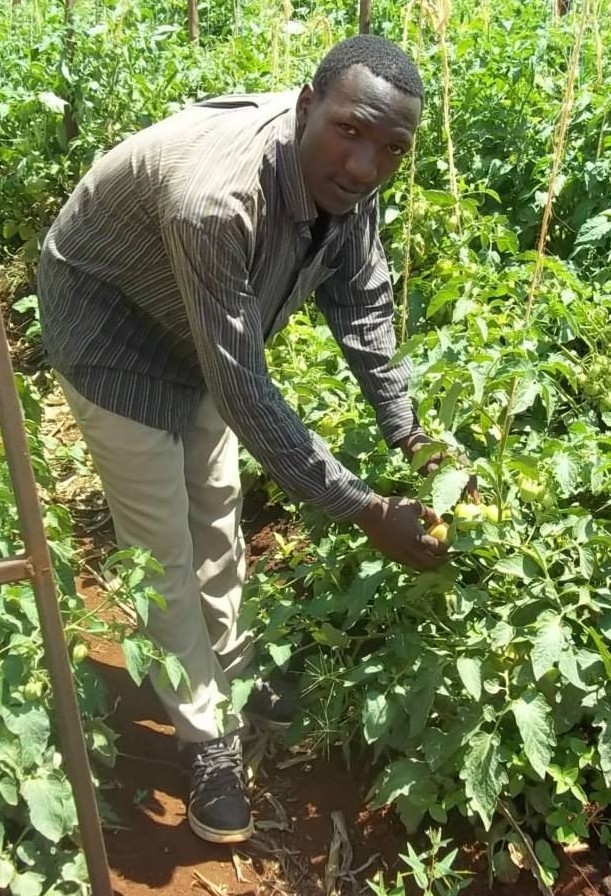 i was born in suneka town kisii county in western Kenya-nyanza. i grew up there and studied at matongo primary school and later at itierio high school- in the year 2009 when i did my o-levels.
i passed and people of my community volunteered to help me raise school fees at chuka university college to pursue my computer course. that is when i relocated to chuka town. being away from parents and relatives, college life was never an easy task and one had to look for other alternatives of live. i saved my pocket money and chose to lend a small shamba, in 2010 at ksh 4500 per year, and i started planting vegetables and selling them in chuka town, ndagani market and as well as my neighborhood. that is what has kept me in chuka up to date. although i graduated from college last year.

i am a small scale farmer. i have a small land approximately 1/4 acre of land. in chuka , the climate is relatively favorable to crop farming but thanks to Nithi water and sanitation company (niwasco) for adequate water that it has suplied in the region , that helps us often irrigate our crops when rain becomes unpredictable. being located on the slopes of mount Kenya, the terrain has also rivers flowing in almost every ridge, hence this has been helping us , farmers a lot.since the year 2010 when i rent that land , i have been engaging the land in a variety of crops ranging from maize, beans, kale's, cabbage as well as potatoes . i am may not be so good in the farm but whenever put my efforts, i really reap a satisfactory harvest. i am also a small poultry farmer with about 10 chicken. this season , we predicted plenty rainy season. and as other farmers were planting, i decided to try a new brand. tomatoes. that is what i have in the farm. it has cost a lot of resources including fertilizer, spray and labor, but the crops are promising. because the crop have started bearing fruits .i am expecting to reap great from the farm.

the reason why i need a loan from zidisha is to help me erect bigger stands to support the tomatoes and their fruits so as to protect them from the heavy rains that are heavy in this region. i will buy more poles and ropes and need to hire extra labor so as to finish supporting the tomatoes before rains destroy them.

When zidisha organisation will finance my loan, the following are the ways in which I will spend the Ksh 4300 that I will be awarded.
I will buy 60 wooden poles about 6 meters high each costing ksh. 50 and synthetic ropes (500 meters long) costing ksh 650 to erect supporting poles at regular distances throughout the farm and the ropes on top of these poles to support the tomatoes well. The erected poles will be bigger enough and they will support the tomatoes and their fruits and protect them from the heavy rains that we are receiving this season.
i will then use the rest of the money hire extra labor of three people to work with me in the farm for four days at . We shall replace the old structures and erect new taller ones as well as fully support the tomatoes .i want to finish this project in time before the heavy rains threaten to destroy them the tomatoes which are healthy.
I will also oil the poles to protect them from rotting and attack from ants and mites. So that I can reuse them in future for another project. This will become cost effective in future and ensure that I utilize the resources that I already have.

Ask Kevin a question about this loan project, share news and photos of your own, or send a simple note of thanks or inspiration.