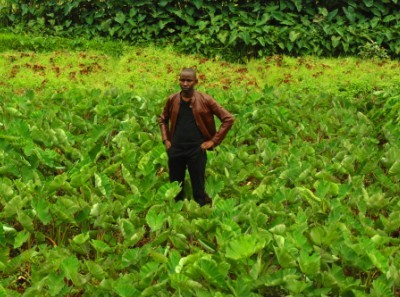 My elders say it was a period of great famine in the land, the farms were desolate and scores of livestock died. Many families, would go without meals and malnutrition took toll on children . Many adults were famished too and it was a time despair, it was the worst of times in Meru - the year was 1985 .

My parents worked hard to put my four siblings and I in school. We did not have everything a child wants but we were such a close knight family, love was our glue, as it is to this day. I laud my parents for upright upbringing and to them I owe much than I could ever say.

Ever since I can remember I’ve had a fervent desire to be a Writer .When I graduated from University in 2006 ,I landed a job in a Bank but a year later I quit to write, and write I did. I’ve a authored a book entitled, ‘Lamentations of African Wilds ‘and now working on two more. My other writing genres are proposal, content, business plan, blogging and general ghost writing .

Not long ago, I found another fulfilling occupation-farming! I‘m inspired to do farming for food security and livelihood .I started with a few livestock ( 1 heifer and 10 indigenous chicken) but the farm is fast growing. Currently I have 3 heifers, 50 Indigenous chicken ,5 ducks and arrow-root farm with 700 plants.
With the help of Zidisha I’l inject capital into the agribusiness for expansion.My Projection is the next 1 year is 10 000 arrow-root plants .I’ve particularly found arrow-roots Production a remarkable venture owing to its low cost of production (comparative) using highland technology ,low risks and sustainability. Once the project stabilizes I wish to inspire other community members to embrace it through capacity building .

Not only do I want to enhance my livelihood through farming but create impact to the community through food security ,I also find agribusiness very interesting .Until recently when I had to unlearn, I had put in my mind that a farmer is an old chap who wears long overalls and chews tobacco while hauling manure into a dilapidated wheel barrow. Times have changed; farming is now a rewarding occupation .It unleashes confidence ,creativity and it is altogether fun.My favorite thing about being a farmer is that I wake up every day knowing exactly what needs to be done and I’m seeking your empowerment to do it.

My farm in Meru has very favorable conditions.There is water,electricity and good transport infrastructures .The community around is very hearty and cordial except that alcoholism among the youth is a thorny issue.

I like reading fiction and classics as well as writing ( The book I'm currently writing is entitled 'Interview with a Ghost' ). On a good day you may catch me carving egg shells. There is something fascinating about the shape of the egg, and the idea of making this into art.

I do mixed farming-Crop and livestock .
On crop segment my focus is arrow-roots . I 'm using Upland Arrow-root Technology .This farming method can contribute greatly to food and income security, while helping in climate adaptation in Kenya, bearing in mind many river valleys have dried up due to global warming. Upland arrowroots technology involves planting the crop in trenches lined with polythene paper and filled with soil manure mixture at a ratio of 2:1. Planting trenches are spaced at 0.5m. One acre of upland arrowroots technology grown tubers will accomodate 29,333 plants which will yield 29,333 tubers sold @ Ksh 15 ($0.15)= Ksh 439995 ($4399.95 ) gross income. The tubers are in high demand in Kenya due to increased health consciousness .Arrow root leaves are rich in vitamins and minerals. They are a good source of thiamin, riboflavin, iron, phosphorus, and zinc, and a very good source of vitamin B6, vitamin C, niacin, potassium, copper, and manganese. Corms are very high in starch, and are a good source of dietary fiber.

On Livestock framing my present focus is heifer rearing and indigenous poultry ( later on I'l introduce pigs. As dairy farms grow and specialize in milking cows, one enterprise that may be removed from the dairy farm to allow for milk cow herd expansion is heifer raising.I thus buy heifers,feed and sell after a few months (8-10 months) at a profit.Say a heifer goes at Kes 10 000 ($100),at maturity I could sell at Kes 45 000 ($450).

I also keep indigenous poultry,mainly chicken and ducks.They are easy to establish,are more prolific and unproblematic to rear,are more genetically diverse, well adapted, and more resistant to local pests and diseases and they are are vital for future food security, leading towards self-employment and self-reliance.In addition they fetch better prices in the market compared to hybrids.

I'l be able to service the loan from the proceeds of my writing services and salary from my employment .I'l plough back 50% of the profits for business expansion and remainder for home improvement and education of my daughter.

I wish to expand an arrow-roots project and run the farm more efficiently.The loan will help me cover some of the operating costs necessary to run the farm.In detail I'll do the following with the loan:

A small town in southwest of Germany., Germany

Ask Thomas a question about this loan project, share news and photos of your own, or send a simple note of thanks or inspiration.