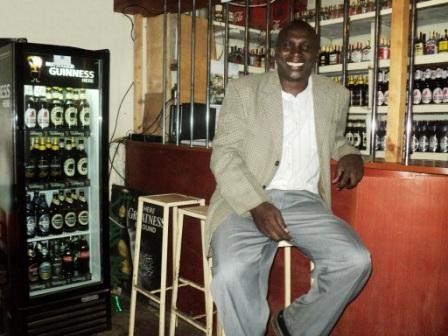 My name is John Kabutu Mariga, a Kenyan citizen. I was born in 1971 at Kihoya Village of Muranga County. I was raised in a family of twelve children; two girls and ten boys. I joined Kihoya Primary School in 1978 and finished in 1987. Here I served as a Class Prefect between 1984 and 1987 despite my tiny body at that time. I was also a choir member of our local church. I then joined Kangema High School for Secondary Education in 1988 and finished in 1991. Here I served the school as Assistant Head Boy between 1990 1991. Later, I joined Graffins College for a Diploma in Computer Studies. Upon completion I joined Rongai Secondary as a Computer Studies Teacher. This is when I shifted to Rongai. Currently, I am the Head of Technical Department in the school, a Member of Disciplinary committee, also in charge of Community Service, in charge of generating Students' Report Forms after exams among others. I am also the longest serving staff in the institution.

During my free time I like listening to music and sharing drinks with my customers since this is the only way I can confirm to them that I am offering good commodities that I can as well consume.

I am married and a proud father of three children; two girls and one boy. Two (a boy and a girl) are in Primary School and the other girl completed her Secondary Education last year (2014) since she repeated one class. She is yet to join College. She wants to become a nurse while the boy wants to be a pilot and the little girl wants to become a teacher like her father. I am a resident of Rongai District of Nakuru County.

I started the Bar Business in 2010 when my first born joined Secondary School. This is when I realized I could no sustain my family with the earnings I get as a teacher only. My survey landed me to this Business as a Better Option. Other than upkeep of my family, I bought three plots in Rongai and managed to develop one and shifted from teachers’ quarters to that plot.

Apart from increasing the stock in my business, I managed to increased the holding capacity of the enterprises, added new brands of drinks, bought a Flat Screen TV among other developments. These were made possible from the earnings I got from the business through the funds I got from Zidisha. Any other Financial Boost that I may get will be of great value to me.

Recently, I completed paying for third plot still in Rongai which I have been paying in installment from part of the income I generated from my business.

Other than teaching, I run a bar at the centre of Rongai Township that provides both Alcoholic Drinks and Soft Drinks.

There is a good demand for the commodities since this is one of the places where people spend their leisure time after a busy day. This is also a meeting place for friends when they want to relax and chat. My customers prefer the Pub since it provides very friendly environment. Most of them even commend it to their relatives and friends especially when they have visitors e.g. during family gathering, get together, weddings and other functions. They term it as a ‘Cool Place’. I have also realized they like referring to it a ‘Home Pub’. The services offered are very pleasing. The language used to the customers not only by Myself but even by the Bar Attendant is ‘High Class’. All these are confirmed by our customers and we feel very proud. We also provide some entertainments in terms of Soft Music.

Due to improvement I have done to my business through the funds I get from Zidisha, I have managed to generate more income. Apart from adding stock and new brands I managed to buy a 32 inch flat screen TV. Customers normally flock there especially during Barclays Premier League to watch football. Some even watch while standing when all the seats are already occupied. Currently at one particular time the bar can now accommodate 28 customers seated. On a good day, my sales have gone up to $95 and my monthly income has gone up to $200.
With the new loan, $158 will go to license so that I can be operating Bar and Restaurant, $158 I will buy cookers, $85 I will buy utensils, the rest I will buy meat, flour, potatoes, grains, greens and all other items required while preparing delicious meals for my customers. I will be expecting a minimum monthly net income of $264.

Dear Friends,
With the assistance from Zidisha I have managed to improve my business to a high levels, hence attracting more customers. To mention just but a few, I bought a 32 inch flat screen TV. Customers normally flock there especially during Barclays Premier League to watch their favourite teams like Arsenal, Manchester United, Chelsea, Manchester City, Liverpool etc as they enjoy their drinks. I also bought more furniture to accommodate extra customers. I now have different brands of drinks.

I am now looking forward for applying for a Bar and Restaurant license to be not only offering drinks but also meals. This will automatically increase my income since food and drinks go together. Not only that, with current license (Bar license), it allows us to operate between 5:00pm and 11:000pm during week days and between 2:00pm and 11:00pm during weekends. This definitely limits the operation time. With the Bar and Restaurant license, there is no operation limit provided drinks are served with food. Therefore this will give me more time for operation time and therefore will serve more customers, and eventually an increase in income. With the new loan, $158 will go to license, $158 I will buy cookers,$ 85 I will buy utensils, the rest I will buy meat, flour potatoes, grains, greens and all other items required while preparing delicious meals for my customers. I assure you this is a project worthy funding an if I will be expecting monthly net income of $264. Thank you in advance.
John Mariga.