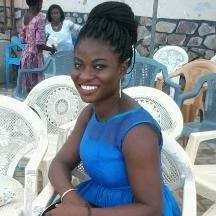 I am Elizabeth a mother of one and I am from Ghana in West Africa. I sell bread in my community. I grew up among four strong boys as my siblings. so I was much protected. I had a very happy childhood too. hardship and challenges I believe are for humans to solve them and I have had to endure somuch of it till today. However, I do not give up no matter what the case is . I began selling bread as soon as I completed senior high school and indications pointed that I could not further it .
it was much easy since an aunt baked it so I needed not starting capital at all. I traded on credit and paid her back later. it was profitable too and it has always so.
I like to sing and meet with friends at social gatherings.

I sell bread in my community but in larger quantities. these are part of basic food demands in my community since both the young and old eat and use it both in the mornings and in the evenings.
The profit margins are good and for that matter that is what I have been doing for more than five years now..
When I go for fresh baked bread from the bakery, after sale I do make a profit of more than 30%.
I will want to build a very small house of my own and for that matter I have already buy a land so much of my profit goes into my building project, I save small and get a part back for operations..

I will use the entire loan to go for bread but on weekly bases. I will buy the following.
Baked Bread.$400.00
Take away rubbers ..$30.00
other expenses like transportation.$20.00
This will fetch me a lot of profit. I will increase my sales and my profit will increase greatly too .
To the people of my community, there will bread available for them when and how they need it and to me it will yield me much profit and help my business stand so well.