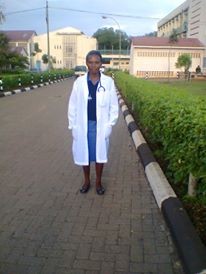 Anti-malaria drugs for my pharmacy

I am Clara Kipruto from Port victoria and now i live in Lela town where my pharmacy is located .during my times at school we had dream like me I had always dreamed of being a surgeon when I grew up so some times we would sneak with my friends to go to the lake shore to catch some fishes operate them as we had seen surgeons do in the television i was the only girl child in the family of six in our community had that belief that educating a girl child was a waste of resources and time so many of the women at the community I lived we illiterate but some how I managed to finish primary school and some how I also managed to get away with a secondary school certificate my dad decided to take a risk and take me to a college to do a diploma in clinical medicine instead of taking me to a university to be a surgeon after my course my dad decided to offer me capital to start a business since I was the only learned in the family of 6 who had left education for fishing so we decided to use their school fees in starting a pharmacy.

I am the one who suggested that the pharmacy was the right business to be located at the position it is today so as to be a monopoly, I had some experience in working in medicine so I could handle the medicine without any problem also i had noticed the absence of another pharmacy in over 100 miles from where my pharmacy is located this was the main course of me to start this business in the pharmacy I do not only offer medicine alone but services such as treating who have been electrified ,suffocated and the patients who are about to drown this all services are not easily found in one roof hence so many people are attracted to my pharmacy this pharmacy assist me in in the pursue of my dreams of being a surgeon.

I take golden opportunity to thank all my lenders who supported my first loan,may God bless you all as you have help me empowered myself as a woman now i come again for my second loan.Kindly support me again.

This loan $200 i will use to add antimalaria for both children and adult which common now hence i will help to save life as i bring the drugs closer to the people.I too will benefit as the demand will increase hence be able to sell more.

The remaining $200 i will add on my mpesa float as i have withdraw to pay for my membership fee and returning the money back will help my business to be stable again because i will have the cash flow,thank you.

Ask Clara a question about this loan project, share news and photos of your own, or send a simple note of thanks or inspiration.