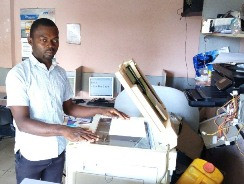 My name is Nwobodo Sunday, I'm a system analyst/instructor that based in Abuja, Nigeria.
well i was a boy that start hawking at early stage from Lagos State were i was born and brought up and also sponsors myself in secondary, when my father could no longer pay my school fees till i graduated from secondary school so i decide to learn & go to computer school in Ikeja Lagos. where i learn how to fix a systems (Laptops & Desktop) and further to acquire Microsoft Certified System Engineer (MCSE) in 2010 at the National Institute of Information Technology (NIIT - ABUJA)

I have a cyber cafe/computer school am running presently, it is a business center before i include computer school, so also to expand and create more awareness of what i do and want to include selling of all computer consumable accessories. e.g Tonners for Printers and Copiers including chips for the printer including repairs and installations

I sincerely Appreciate all my Lenders, my next loan is to buy a fairly Used Colour Digital Sharp Copier for my Cafe in other to improve my sales and bring innovation to the business, i will be grateful if my loan Proposal is granted

Ask Nwobodo a question about this loan project, share news and photos of your own, or send a simple note of thanks or inspiration.