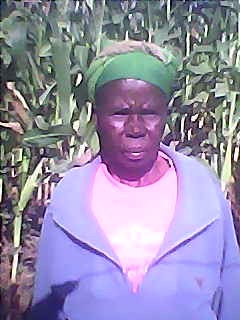 I am 76 years old and i am a grandma. I have lived for a long time and I thank almighty god for my life. I am a widow having lost my husband very many years back. Since my husband's death i have never found a stable job or income generating activity worth mentioning. However, i have been selling grass which is used for roofing most houses. unfortunately, business has been bad. Most people in the neighborhood are now using iron sheets for roofing. most of them got GiveDirect funding which helped them buy iron sheets. My grass business is now down. i have now decided to look somewhere else, move into commercial farming. I want to do horticultural crops like vegetables, onions and tomatoes in addition to grains because I have a large piece of land.

My initial business, as mentioned above was selling of grass. however, this business did not do well when people got funding for iron sheets. Now I have resorted to commercial farming because the area needs food crops like vegetables , onions and tomatoes. Moreover, maize has become so expensive so i believe i would gain from selling my farm harvests. With help from Zidisha, i believe I can clear more ground for farming so that my income would increase. Thanks.

Having managed to plant successfully with the previous loan, I have seen that i can increase production by extending my area of production, this will require more inputs like manure, seeds, man power and variety of crops. I would like to add more beans to the area and prepare for next planting season too, 700 dollar would enable me to achieve this objectives and prepare the land for next planting season, thanks.

Ask Jenifa a question about this loan project, share news and photos of your own, or send a simple note of thanks or inspiration.