Expansion of my clothing business 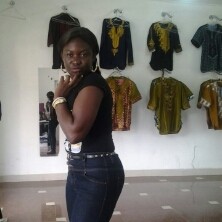 My name is Agyei Bediako Nathanael; I come from Berekum in the Brong Ahafo Region of Ghana. I was born on the 14th of October, 1986. I belong to a family of five with two siblings. I started my education at Freeman Methodist Preparatory School at Berekum. I had my Junior High education at St. Mary’s Junior High School and proceed to Sunyani Senior High for my High school education.
I hold a Bsc. Chemistry degree from Kwame Nkrumah University of Science and Technology. I was posted to Duayaw Nkwanta, a small town in Brong Ahafo Region to do my National Service in 2009 at Serwaa Kesse Girls’ Senior High School.
At the time the school was unknown and had a small population mostly from the villages around Duayaw Nkwanta. I sort to find a way of helping raise the image of the school, so I started a Debating club in the school. I faced a lot of challenges with all sorts of false allegations levelled against me, most especially because I was a science teacher handling debate. But I never gave up knowing I wasn’t doing it for myself but for the students involved and the exposure they were getting. In our first year of participating in the National Debating competition for Senior High Schools in 2011, we won the District competition and came second in the Zonals. This boosted our moral and we started preparing for the 2012 edition immediately.
During the 2012 edition we won all competitions all the way to the finals where we met and beat one of the best schools in Ghana, St. Peters SHS to become National champions. Since then the school has become one of the best schools in Ghana with girls coming from all over the country. My debate team continues to do well having won all district and zonal competitions since 2012 and placed second twice at the regional level.
It was during my interaction with students in my team I realized most of them had serious financial problems so I started to support them with the allowances I made. I sometimes get friend to assist. Not very long ago a Peace Corps volunteer in my school and I successfully raise two school terms fee for one of such students through Facebook. I am not able to bear the sight of a brilliant student in need.
It is in view of this that I started to do business with the aim of raising enough money so I could continually support such students.
I am still teaching Chemistry in the school.

In an attempt to find a short term income earning business because of the purpose of supporting students, my attention was drawn to how beautiful shirts sewn with Ghanaian print and designs were fashionable and people loved today. I also realized that though very beautiful it wasn’t very expensive and is very easy to wear and appear at all functions. The problem with most people was that tailors usually disappointed people with it came to time of delivery therefore killing the interest of many.
I decided to buy the prints and give tailors various designs to sew them into, I would then sell them ‘already made’ to people. So I send the shirts in various shapes, sizes and designs to other schools and offices.
It cost $10 to buy materials and sew one shirt. I sell a shirt at $15. I am able to sell an average of 50 shirts a month.
I however do not have a shop in which I sell so all the shirts are kept in my house. So i only sell when i move to the customers. I also do not have my own means of transport so i rely on public transport which takes a lot of time.
My plan is to raise enough money to hire a shop to expand the business and. Also to buy a motorbike to make movement faster and cheaper so I can maximize profit
It is my hope that Zidisha would help me acquire the loan to help to build upon my business since the interest rates and conditions attached to the banks and other financial institutions are unbearable.
I am certain of keeping my payment on schedule because i have a permanent source of income as a salary worker. I promise I won’t disappoint. And by helping me you will be helping the students in my school who have need for money. Thank you

A friend in the USA who visited me recently has requested that I ship some of the shirts to him to that business can begin there since African prints are in high demand in the USA. In other to achieve new sets of designs will have to be introduced especially ones that depicts African culture. It will cost $20 to produce and ship one shirt which will sell in the USA for a minimum of $50. So s net profit of $30 will me made which will help me continue to support my less privileged students

Ask Nathanael a question about this loan project, share news and photos of your own, or send a simple note of thanks or inspiration.