For expansion of rabbit-keeping project 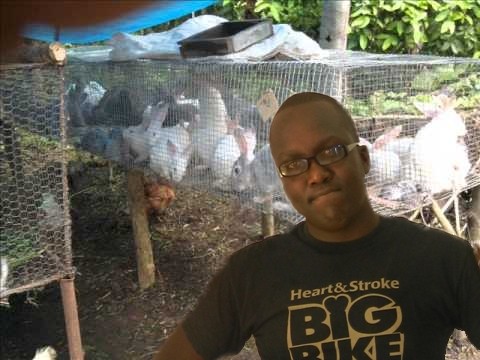 I was born in late 1970’s in Baringo County, Kenya, I grew up in a poor family and couldn’t further my education above the fourth form because my family couldn’t afford to pay for it. Although i always wanted to become an aeronautical Engineer, i never reached that dream. Instead i got a job as a security guard and worked at it for Three years before I got fired.
Before I ventured into Rabbit Farming, i had already tried greenhouse farming, fish farming, organic farming, but settled on Rabbits because they are the most lucrative domesticated animals in the world in terms of time, space utilization and profit margins. I learned everything about rabbit farming from the internet (by using Google) and finally started a small rabbit farm that i currently work on.

I learned everything about rabbit farming from the internet and finally started a small rabbit farm with just three rabbits. I currently have 28 Rabbits and have networked 4 rabbit farmers across the area who receive free training and support and in turn sell their mature rabbits to the clients I connect them with.
My major aim is to Partner with universities and local/international organisations to train more youths and women on rabbit farming as a means to alleviate poverty as well as to make Kenya a major player in the untapped global rabbit meat market.
I am looking forward to expand the business and start breeding. But that’s not all. With support from lenders, i plan to export rabbit sausages to the other counties and countries where the demand for healthy meats (like rabbits) is growing.

To add more rabbits in my farm and create marketing strategy both online and offline.
Each lot of rabbits we sell online are sent outside Baringo county. For a capital of 14,000.00 Ksh, i will be able to purchase 4 does and 1 buck i which i will interbreed them producing approximately 25 - 30 kits. selling them when two weeks old for approximately 1,000.00 Kshs each will fetch me a profit of not less than 14,000.00 Ksh. i will use the profit to enlarge the farm for my focus is to lead nationwide in breeding and rearing rabbits.

Ronald opted to pay $58.13 into the Zidisha Members Loan Fund in return for a higher starting credit limit.

Ask Ronald a question about this loan project, share news and photos of your own, or send a simple note of thanks or inspiration.