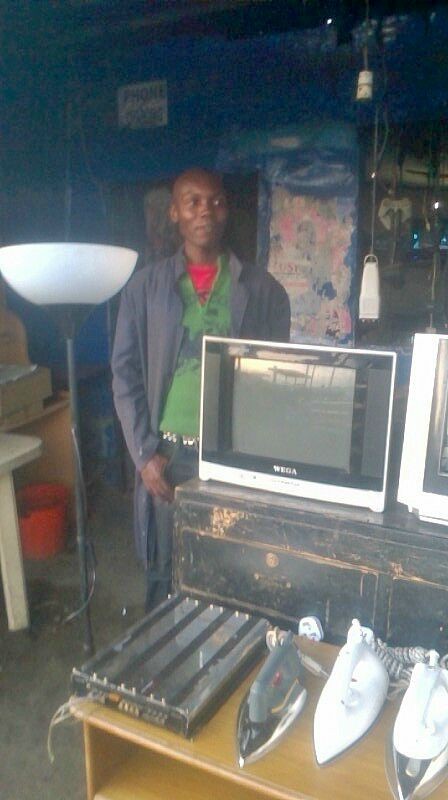 Inventory for my second hand shop

Am a 32 years old Kenyan and married with a four and a half month old daughter. Am the first born in a family of three with two sisters. Both my parents passed on in 1997 my dad and 1999 my mum. We were brought up by my grandmother at kaloleni estate after my mothers death. I attended primary school at SSD primary in Nairobi where i sat for my KCPE exams in 1998 and high school at Usunge high school Bondo district where i sat for my KCSE in 2002. I graduated from the Kenya polytechnic with a diploma in business administration in 2007. After the post election violence of 2007 i got employed as a casual worker at deacons Kenya ltd which deals in fashion. In 2008 i was promoted to the position of shop supervisor for their shoe store at Sarit center Nairobi called Angelo. In august 2010 i moved from Deacons to Sankara hotel Nairobi as a guest relations agent. I stayed there until April 2014 when the hotel downsized due to low business in the hospitality industry in Kenya as an effect of travel warnings to Kenya by European countries and the United states due to terrorist attacks on Kenya by the al shabbab group in somalia. I used the settlement money to start the business of buying and selling second hand home electrical items and home furnishings at makadara estate Nairobi in June 2014 which am operating up to date

After Sankara downsized in April 2014 i was paid a total of 1200 usd as benefits. Since the economy was not doing well at that time there were no jobs so i opted to use the money to open a used goods store at makadara Nairobi. The main reason for venturing into this business was the low cost required for set up since all i needed was a shop no need for fittings, and i got a shop for 50 usd a month at a location where there were two other shops doing the same trade meaning customers were readily available. So my recurrent expenses are 50 usd per month for rent and 0.25 usd daily city council license fees so total fixed expenditure is 58 usd. I invested 900 usd in the business with the rest going to use for the family. By the end of the year 2014 i had an operating capital of 1300 usd and am projecting 2200 by close of this year. Most people in eastlands area where i operate are low income earners hence many people don't buy new electronics or furniture from shops as they are expensive they buy second hand. Secondly since most people work at industrial area where majority of the companies pay poorly and always delay salaries many people in this areas always sell their household items to get by hence a steady supply of goods and clients at the same time. My most busy months are January Feb March May September when many people sell of stuff to pay school fees. In December i get more buyers as many people have been paid end year bonuses.
On a good month i make a net profit of 300 usd and 180 usd on a bad month. My main challenge has been lack of capitalization as at times clients bring in goods and i don't have money to buy so they take them to the competition and this affects my reputation since they may not come back next time assuming i normally don't have capital. Apart from relying on the estate customers i also sell and look for goods from the online classified advertisement company called OLX.
From the profits i make 70% goes into family expenses and i always re invest 30% whenever possible.

I plan to use the whole loan amount to increase my stock inventory for the shop i run that deals in buying and selling second hand households items. December and january are very active moths in my line of business so the extra credit helps in retaining customers as they wont go to the competition due to lack of funds to buy the second hand items they are selling. Am looking to grow my business through 2016 through the help of zidisha as most saccos which give affordable loans again require you to save a third of the loan amount as guarantee. Considering that i will be tying capital if i go this route it means i will not be able to realize my target growth for 2016. With the help of zidisha am seeing my business grow as projected for the next year.

Ask Renaldo a question about this loan project, share news and photos of your own, or send a simple note of thanks or inspiration.