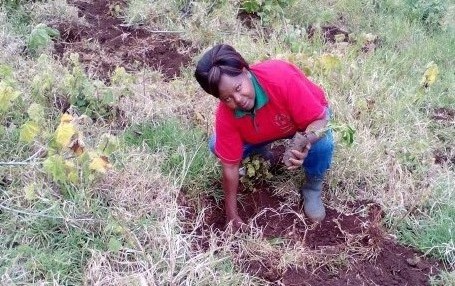 Hallo friends. My name is Jane Murungi. I am a mother of 2 school going children.

I grow horticultural crops such as capsicum, tomatoes etc.
My first born child who is 17 years old wants to become a chef in one of 5 star hotel in Kenya. The other one wants to become a medical doctor and he is aged 12 years old.

I am also actively involved in social work where through my church, I give a helping hand to the elderly and vulnerable people by visiting their homes.

My business if farming. I do poultry, dairy and crop farming. I do sell eggs, milk, chicken meat, then tomatoes and maize. These are the products I get from my farm. These products are in demand, especially the milk and tomatoes. There are bigger buyers who buy from the small farmer and then supply to big towns like Nairobi and Mombasa. Sometimes demand is so high, like for tomatoes that I and others farmers cannot even supply fully. That is why I chose this kind of business. For the time I have been farming, about 4years now, I do between half and one acre of tomatoes. Together with the chicken and dairy cow, I spend between 300 to 1000 USD. The profits are not high though. After sales, and all expenses, I do make about 200 to 500 USD profit of different months and seasons. This is the money I use for fees, any medical issues and also building a small house currently under construction.

I have been doing serious farming for the last few years and this has given me important experience. I am now confident that I can handle all aspects of farming such as land preparation, planting, harvesting and marketing the produce.

I strongly feel that I have found my niche and I intend to do this for many years to come. I have an ambitious plan to expand my farming activities in the a few years so as to become a big producer of horticulture , dairy and poultry products.

My immediate need right now is to lease more land for crop production. I will get two more acres and fortunately the land is just adjacent to my current farm. I will use this piece of land to produce more fruits and vegetables as well as planting nappier grass which I will use to feed my cattle.

I will spend USD 600 to lease the land for 2 years. I will use the remaining balance for land preparation and buying of seeds.

Thank you for taking your time to read my loan proposal.

Jane opted to pay $287.59 into the Zidisha Members Loan Fund in return for a higher starting credit limit.

Ask Jane a question about this loan project, share news and photos of your own, or send a simple note of thanks or inspiration.