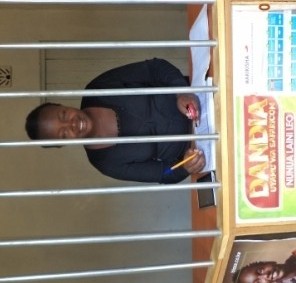 My names are Mary Wanjiru, i live at Subukia Town. i was born in the year 1988. i completed my secondary education in the year 2012. from there i went to Shammar College where i did a diploma in ECDE. Upon completion there were no good jobs coming by as the government in currently not employing ECDE teachers as earlier promised. This prompted me to venture into business having been employed to teach in a local nursery school. Its while in my short duration working that I decided to start an Mpesa business.

My business is known as Merceline Mpesa and Phone accessories, I offer mpesa services to my clients as well as phone accessories. My location is a bit good since we have a local bank near and most customers prefer safe means which is mpesa after bank transactions. i also stock phone accessories which i sell to people around. i have been in this business for over one year and the returns are fair since i receive commission from safaricom on monthly basis and also do make sales. I also have a cocacola fridge where i sell soda and snack to clients mainly bank employees and customers.

With my second loan, i am requesting lenders to fund me to enable me stock variety of mobile phone accessories like memory cards, phone covers, chargers, usb devices and batteries. With my experience now, customers need variety and many times i was forced to refer them some where (my competitors) since i did not have some of the accessories they required. I require about USD 400 for these accessories and then about USD100 for display dgadgets for the phones so that customers can see them at glance. i am currently working on shelves that are transparent to reduce the effect of dust and also secure these gadgets. I once again take this opportunity to thank you most sincerely for first loan.