Add inventory of fertilizer sprayers to my farm supply shop 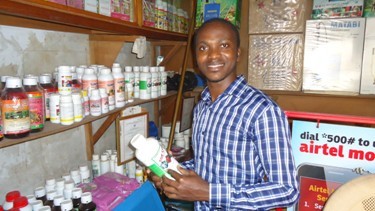 Growing up as a young boy in farming community, I naturally developed the love for agriculture and from childhood till now, I have been involved in the cultivation of food crops. My long life dream of becoming an entrepreneur motivated me to start an agro chemical shop in Berekum after my national service with the help of my father. I did a survey in my area and realized that most of the farmers in my community are gradually changing from the traditional method of using just hoes and cutlasses in farming and have embraced the modern trends of cultivating on large scale, which can be made possible through the use of machinery and agro chemicals.
However, the few agro chemical shops that were available at the time were into what I term as “just buying and selling” without educating our farmers, most of whom are illiterates on the right and appropriate procedures on how to use these chemicals they sell to them.
My passion to offer quality and better services to farmers in my locality so that the chemicals they use in farming wouldn’t have any adverse effect on consumers led to me opening an agro chemical shop in 2009. The name of my shop is FARMGATE AGRO CHEMICALS, located off the Berekum – Dormaa road and opposite the Barclays Bank.
After the necessary education and equipping myself with the necessary knowledge concerning the application and use of agro chemicals and use of farm implements and machinery, I employed one person to help me manage the shop and he takes charge when I am not physically present.
I am now able to support my family and other ventures I enter into due to the proceeds I earn from my Agro chemical shop.

I thank lenders for your support so far for improving and helping me serve my community members well. After my first, second and third project, I must admit that the loans have been very helpful. I am requesting for this fourth loan to enable me add motorized sprayers to the items I sell at my agro-chemical and input shop. Prices of motorized sprayers is between $290.00 - $395.00 depending on the brand. With the requested amount, I can buy an average of two. From the little survey that I have done, I believe I should be able to sell at least one motorized sprayer in a month. Each sprayer will give me an average profit of $27.00. Since I would be repaying the loan over a period of 5 months, I intend to save the profit I will make over the period so that, after the loan has been fully paid, I can use the profit to continue buying motorized sprayers for my shop.

Ask Obeng a question about this loan project, share news and photos of your own, or send a simple note of thanks or inspiration.