Purchase of inventory for my retail shop 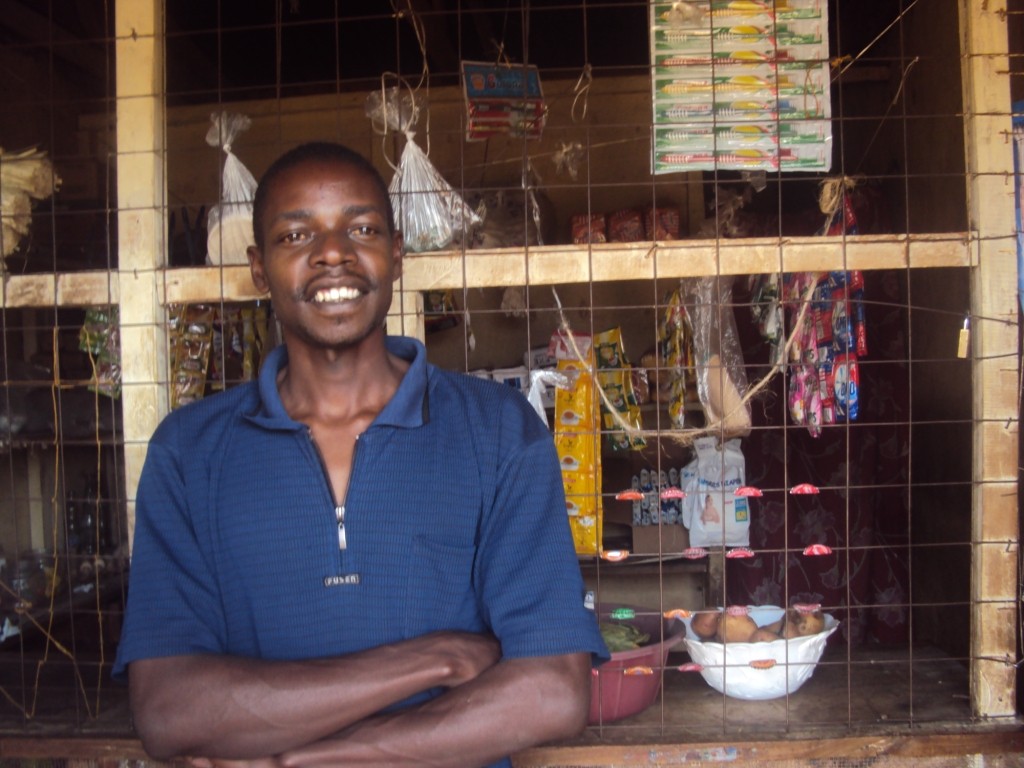 I am 31 years of age and single, not having a family yet. will work on this later when all works well and am financially stable.

I was born and raised in Kari Muguga, I attended primary and secondary school education from the years 1991 – 2002. I lost my father in the year 1994 while in class for in primary, my mother a nursery school teacher worked hard to take me through education.
In finishing high school in the year 2002 and at the age of 18 years, I wouldn’t join campus through government sponsorship as I was 2 points below the cutoff points. This was after the results were released in the year 2003. For me to get to campus I therefore had to get some job and work my way to campus as a privately sponsored student as I still had qualified to join campus.
I travelled from the urban area to a rural area Kericho, to find work in a tea factory. I managed to secure a job at Litein Tea factory as a cleaner, which I did for 18 months, I took my self for driving lessons (part time) and passed the test in 2004 getting a driving license. A friend then invited me in Mombasa in the year 2008 and secured me a driving job in a car rental business Pervig Car rentals, which I worked for two years and later joined Avenue prestige car hire which I worked for another two years. I mainly drove clients to the North coast ( Malindi , Kilifi, Lamu) , south coast (Diani, Kwale, Likoni) other than that also to Nairobi, Voi and Wundanyi ,Taita. I loved the places I was a tourist too in my country Kenya. I also picked clients from the Moi international airport in Mombasa and took them to various hotels they had booked. As much as I liked the adventures I still thought of school .
I therefore decided to find a place that I would have a good environment to do my studies and found Moi university Main campus Eldoret to be the right place for me. I therefore had to travel to Eldoret and find a place for me to live, a job to do too so that I could be able to take care of myself. With my saving I managed to secure a room and after a week of searching I found a job as a retail shop attendant. I worked for one year and with the amount I had raised in my saving $437.00 bought the shop from my boss who was travelling abroad. The same year I too applied for a course Business Management degree and was admitted. I am currently in my second year just finished the first semester waiting to start the second semester on 11th May 2015 to August 2015.
I didn’t think I would get to wherever I am now, in campus and also own my own business. I am hoping to be in a position to assist my mum as she is about to retire, just as she took care of me and show her the worth of investing in me.

Location and customers
My retail shop is located next to the main stage and here my customers surround me in a radius of 4Km. the area is densely populated as the students live in hostels some of storey buildings. And it is from this main stage shops that the same customers come to buy their necessities. The campus has a population of 50,000 students when in session and a working population of approximately 6,000 teaching and non teaching staff.
The campus has two graduation ceremonies that is in August and December every year and during these times the activities in my retail shop are high with so much traffic that increases the daily sales volume resulting to high returns in terms of profit.

Competitors
As for competitors I have several with one with supermarket, but this encourages me to work hard to get to that level. Students too are in the business some offering a wide range of services from beauty to computer services and shops. To be above my competitors quality services provided to the customers is essential to have the customers coming back for more.

Products and services
My business sells or offers the following items cereals ( maize, beans, green grams, peas, and rice), foodstuff( bread, cakes, cooking fat, maize flour, and wheat flour) , others (scratch cards, sweets, salt, and sugar) just to mention but a few. These are purchased in bulk hence enjoying economies of scale and selling at a margin in small quantities in order to make a profit for my self so as to cater for my expenses and ploughing back a certain percentage in the business.

Since joining Zidisha my profits have risen by 24% and am hoping this will continue increasing.

Dear Lenders,
I do kindly request for your assistance in funding my loan, which will be used in the purchase of retail shop inventory such as sugar, cooking fat, maize and wheat flour, rice, green grams e.t.c.) This will assist me increase my sales volume and profit which will enable me pay for my tuition fees in January 2016, as I start my 3rd year. The fee is at $1324 per academic year. I receive Kenyan government funding from the Higher Education Loan Boards (H.E.L.B) of $526.00 which is paid directly to the institution. Profits generated from my retail shop will pay the remaining balance of my fees $798 by saving $75 per month from September 2015. The 3rd academic year will run from January 2016 – August 2016 and, I will complete my fees by the end of July 2016. Thus will sit for my end of year examinations without tuition fee problems.
I will ensure that I also pay my Zidisha installments in time and as stated in my repayment schedule abiding by the rules and regulations stipulated.
Thank you.
Paul Meltus