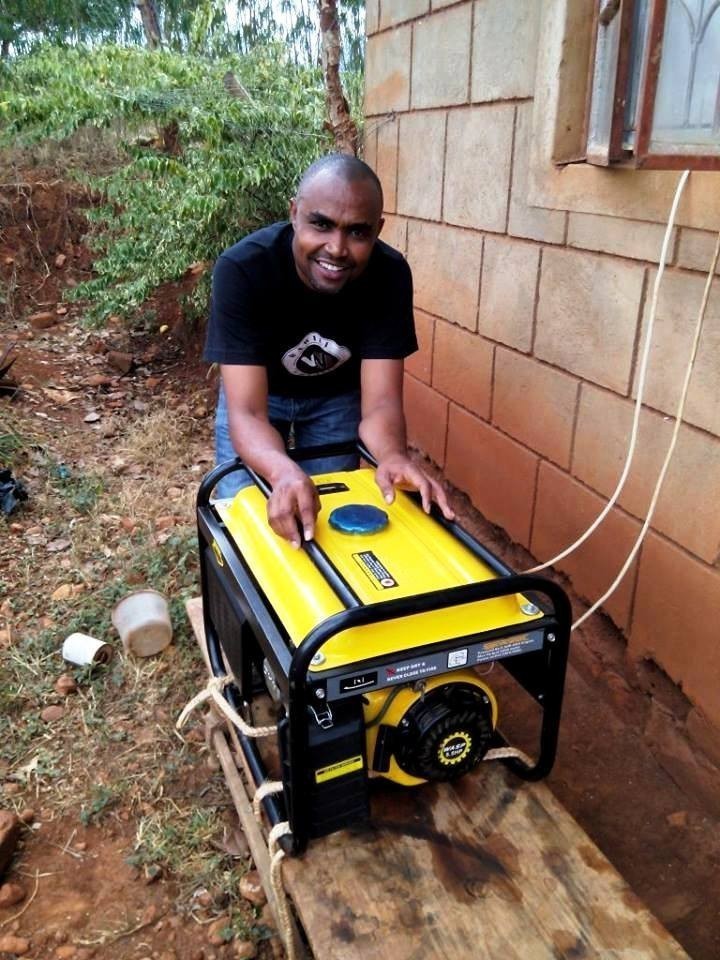 My name is Geoffrey Mwaniki, I reside in Nairobi County, Embakasi District, Fedha Estate. I was born in Machakos County, Kathiani Division, Kaani Sub Location. It is 12km from Machakos Town to Kaani town. And approximately 400 meters off Machakos Kitui road. There is a school next to my farm called St Catherine Girls High School. I am married to Edith Baru and we have been blessed with a baby boy called Nathanael Mwaniki.He is now 4 and half years. I have been farming for the last 6 years. What started as a passion has now grown to be an established business thanks to Zidisha loans which has helped me to grow my farming business.

I am in agribusiness where I practice mixed farming. I have a Green house where I grow tomatoes and capsicums. I am also in poultry where I have 200 indigenous birds. I also have cattle and have also planted pawpaws and mangoes. I have experienced tremendous growth over the last 2 years that I have been in the business. For example, I started with 5 she goats and 1 he goat and now I have over 20 goats. In the area of Poultry, I have been able to construct a house which can hold over 2,000 birds from proceeds from the farm which am planning to stock as soon as possible. I have been also able to plant over 1,000 pawpaw trees which will mature in the next 1 year. Already I have around 100 mature pawpaw trees which I sell the fruits to my customers in Nairobi.The climate condition in our area is very good for fruits which many customers prefer them because of the sweetness.

I am so delighted to come again here to request for another loan having completed the previous loan in good time and with so much ease. That loan helped me acquire The Generator which has transformed my business in a very big way. Thank you very much.

Now I am requesting for anothe r loan of Ksh 83,756 which is equivalent to USD 821. I am intending to buy commercial layers as they are known here. This are the Hybrid Birds which have a capacity to lay up to 95%. Thei r eggs are relative cheap to sell in the market compared to indigenous eggs which I especialize with. Many of my customers have been asking for these eggs hence prompting me to think about the business, and again it is good to diversfy in business.

I intend to start with 500 chicks which goes for KSH 100 (1 USD) per chick bringing a sum of Ksh 50,000 (USD 500) The drinkers and Feedes will cost me an estimated Ksh 12,000 (USD 120) The rest of the money will cate r fo r feeds and transportation as the companies which sell these chicks are based in Nairobi. I have subdivided my poultry house into two so that I can start this new project. They take four and half months to start laying. I will be buying feeds for the subsequent months from the proceeds of selling the chicks and eggs I get from the current business I am running.

I am looking forward for your positive response as you review my loan proposal. I promise to continue to be faithful and repay my loan when you grant in good time and with the same zeal. Thank you very much.

Geoffrey opted to pay $112.11 into the Zidisha Members Loan Fund in return for a higher starting credit limit.