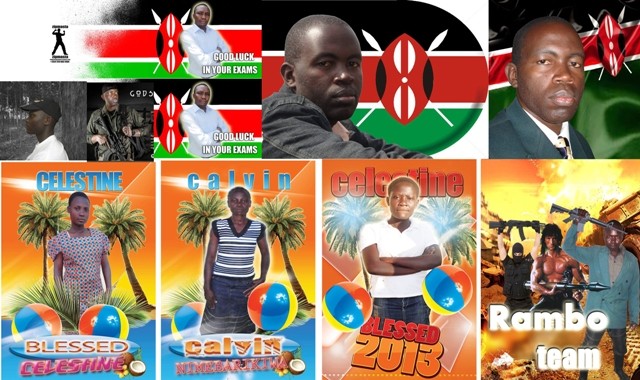 I am a 40 year old male photographer and photoshop enthusiast.I am married and have two sons, Baraka and baby Amani. I attended primary school at Lavington primary school in Nairobi,high school in Mbeji academy,Siaya, and continued on to do my A-level education in a school in the neighboring country of Uganda at Bugema Adventist secondary school where i graduated at the top of my class(i shared number 1 with someone to be precise) and qualified to study Law,which i could not afford after my first semester hence dropping out and living on Kampala streets in the country of Uganda.I ventured into photography business and managed to self educate myself on using photo editing techniques using photoshop,and the products i was producing turned heads literally;people in Africa dont have much variety in the photographic products offered them so i created a niche for myself by making photos of my clients and cloning different popular personalities into the photos,either movie stars,presidents,singers,or unique backgrounds such as New York city,London etc.The locals have been thrilled with the work i do and keep on challenging me to clone them into photos with various themes that they ask for.Mostly they will pay way above the local price for the work i do on a single photograph,which helps my income.
I am involved in charity work too and have a charity known as Widows4Christ which helps build houses for widows across Western Kenya where widows are disadvantaged by very retrogressive cultures.In Western Kenya a widow is considered cursed and is not even allowed to attend a wedding because the bulk of the people believe that she will bring a bad omen i.e the end of that marriage.So i am driven to help these women.After their husbands deaths most extended families participate in a very unfair practice of demolishing the deceased mans house despite him leaving behind a wife,they believe that when the husband dies so does the lead of the home and it is also common practice to hand over the widow to the deceased mans brother as an inheritance.I plan on building a website to crowdfund for the widows.I had one but it was being hosted by someone voluntarily and he closed shop.But when we (me and volunteers) have some income and have raised funds online and locally,we move into the widows home and build them a full house within a week,dig a borehole in their compound,and buy her seeds for planting .I love the work we do and when i see a widow smiling it makes my day and is totally worth it.

I am a photographer and take photos and print them at 50kshs (50 us cents) per photo.I edit the photos to have unique backgrounds and also clone famous movie stars or venues into the photos which makes them popular.
I am looking for some capital to buy an Epson photoprinter and accessories to fulfill my dream of being the best photo studio in town.

Boniface opted to pay $107.96 into the Zidisha Members Loan Fund in return for a higher starting credit limit.

Ask Boniface a question about this loan project, share news and photos of your own, or send a simple note of thanks or inspiration.