Loan to set up a football watching auditorium 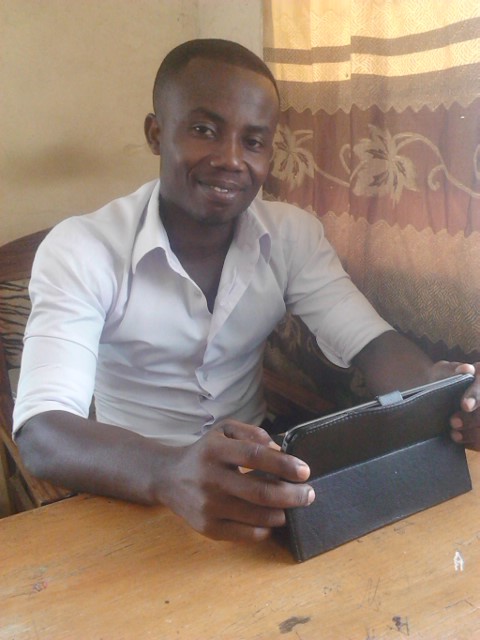 My name is Gordon Akuffo Asare, a native of Aburi, a very popular town in the Eastern region of Ghana. Aburi is mainly popular its botanical garden serves as a tourist site for different people. I am the eldest of five children of my parents. My family and I have seen it very rough in life but it is through God’s grace that we have come this far. My father is a taxi driver who used to have his own car but was unable to maintain it when it broke down after using it for almost 10 years. My mother is a petty trader who because of lack of enough capital to start her own business usually picks up items such as pastries and drinks from manufacturers and sell to customers. I had this aim of never wanting to disappoint my parents but rather to make it to the top in my education. By the grace of God and perseverance I have completed University with a bachelor’s degree in medical laboratory Technology. This I was able to achieve by helping a friend at his clothe selling shop during my vacation time in order to get some money to add to what my parents will give me. This made me to actually move into the business of buying and selling clothes. The most unique thing about where I actually live is that majority of the residents are farmers with most of them being cashew farmers. Currently I work as a biomedical scientist at the district hospital of Tain in the Brong Ahafo region of Ghana. Life hasn’t been easy still since I have worked for 2 years without receiving salary.

ABOUT MY BUSINESS
I am in the distribution and sale of ladies and gents wear such as suits, shirts, ladies heels, sandals, bags, etc in the Brong Ahafo Region. I have a lot of request people make and would like to buy every day and this is generating a good profit for me and as such I want to expand my business and expand to other parts of the country and beyond and to also serve as an avenue to employ others who have no work to do. I currently display the few outfits at a friends shop and as such my clothes are gradually catching the eyes of customers.
I have decided to set up a new business which I think is another great profit making venture. This business I am talking about is like a cinema centre but here only live football matches are watched. Back here in Ghana, People are more in love with the foreign leagues such as the premiership, la liga, serie A, bundisliga the ligue 1 among others. These people do not howerver have the luxury to travel to watch these matches and also buy dstv decoders and watch it at their homes. I have therefore decided to take it upon myself and establish a centre where people will come and watch these live matches at reduced cost. I have already acquired the land for this project and have done the feasibility studies on the total cost. Currently there is only one centre like that in my locality but the way way it is run is not satisfactory. With the little knowledge I have and with the help of Zidisha I hope I will be able to do far more better than that. Also looking at the population in the town I stay, it is very difficult for that center to accommodate the numerous football loving fans. In my loan proposal, I will list the items and the cost involved which I hope lenders will help me.
I promise to execute and respect the rules and regulation of this noble institution.
Thank you.

I would like to apply for this loan to set up an auditorium or centre where people will come and watch live football matches of their favourite clubs. The matches that will be mainly viewed there are foreign league games such as the premiership, la liga, serie A, bundisliga, ligue 1, UEFA champions ligue among others. People will have the chance to watch other local matches and the African chamions league as well. I have already aquired the land for this project and I have also done the feasibility studies for the total cost involved. Here is the breakdown of the items and the cost. The cost listed will be the dolor equivalence.
The project is two phases.
1. First phase: cost of errecting of the structure
wooden boards: 200 dollars
roofing sheets: 100 dollars
cement: 15 dollars
sand: 20 dollars
electricity meter and wiring: 100 dollars

In all the total estimated cost will be 1110 dollars. I believe lenders will help me with this loan and I promise to also be faithful to them and repay the always at scheduled time. Thank you.

Ask Gordon a question about this loan project, share news and photos of your own, or send a simple note of thanks or inspiration.