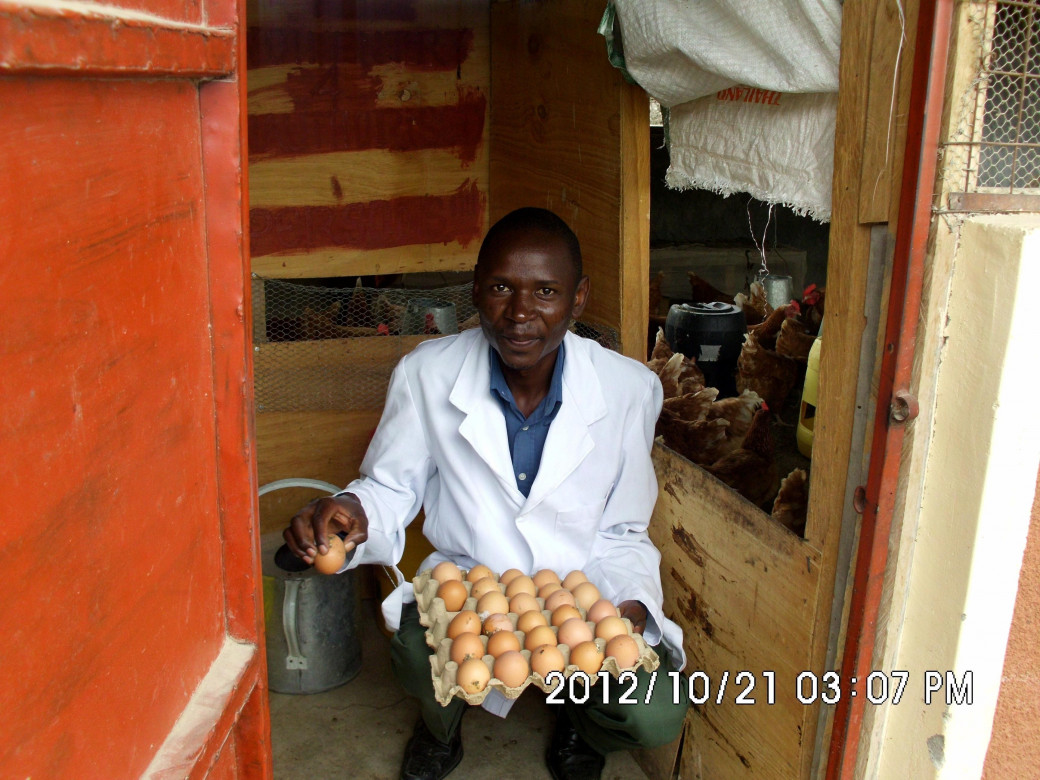 My name is Walter Onyore. Am the second born in a family of four, 2 boys and 2 girls. I was born on 24th October 1983. I am single but intend to marry as soon as I find an appropriate person. I went to Rongo primary school in East Kamagambo location of Migori district in the 1990 to 1998, later joined Mbita high school in between 1999 to 2003. Later I joined Kenya College of Accountancy University in the year 2006 to 2010 where I did my C.P.A. up to part three. I moved to Rongai and settled there in 2011. Currently, I am working at Vanessa Grant Girls’ secondary school in Rongai District of Nakuru County as an accountant.

I am engaged in poultry farming. Due to the high demand of the eggs in the hotels around and the customers who prefer the high quality of eggs my layers are producing due to the feeds used. At the moment, I have 150 layers. Each day I collect an average of 140 eggs which I sell at Ksh 10 each. This fetches Ksh 1,400 daily; which is Ksh 42,000 per month. The cost involves the following
1. 2x 70kg chick mash @ 2700 each =Ksh 5,400
2. 3 x70kg growers mash @ 2700 each =Ksh 8,100
3. 6 x 70kg of layers mash @ 2700 each = Ksh 16,200
The chick mash and the growers mash are given in the first three months while the layers mash is given when the chickens start laying eggs. The lifespan of a chicken is 12 months before it is disposed. During this period the chickens are expected to have consumed 54 x 90kg layer mash at a total cost of Ksh 145,800. Add this to the chick mash and growers mash gives you a total expenditure of Ksh 158,500 against a total income of Ksh 378,000. The chickens are then disposed at Ksh 500 each and consumed as meat in hotels, giving a further income of about Ksh 75,000. This leaves me with a net income of Ksh 309,200 translated to about Ksh 25,800 per month.
There is a great shortage of eggs in the country. The risks involved in this business are diseases and egg damage.

If I get this loan, I will buy 2 acres of land at a cost of 2,000 US dollars for maize farming. I will use about 500 US dollars for land preparation, ploughing, harrowing and planting. I will use 50 US dollars to do the first weeding and about the same 50 US dollars for second weeding. Am also planning to buy fertilizer (Urea) for top dressing for about 40 US dollars. Am sure that if this is done, I will achieve maximum harvest come the end of the season.
The harvest will be, One acre will give me a minimum of 30 bags, each of 90 kgs of maize, and this will give a total of 60 bags. One bag is selling at Ksh. 3,200 (32 US dollar). Total sale will be Ksh. 192,000 (1,920 US dollars) after a period of 6 Months.
This will help my family a great deal as our income will increase hence our life style and neighbours will be positively influenced and even our clan as a whole will benefit as I can offer to sell to them at a lower price.
A quick look at my net income, it will increase by at 50 US dollars per week. This will increase our earnings.
As this will take almost 5 months before I get money, I will be using my salary and my poultry farming to repay the loan in the meantime. I hope you will be able to fund my loan to enable move forward as planned.

Ask Walter a question about this loan project, share news and photos of your own, or send a simple note of thanks or inspiration.