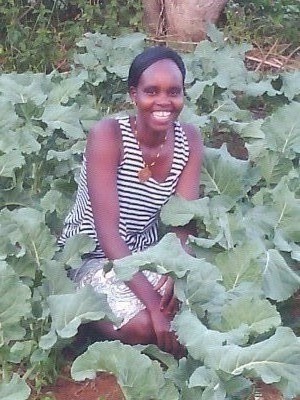 My names are Jepkurui Kibet. currently living in Kabarak Farm. Am twenty six years of age. I am the fifth born in a family of six siblings living with a single parent, my mother. We are three sisters and two brothers both my two sisters are married. My mother is not employed on a basic salary but she attends to her farm in order to make a living out of it. I Completed my primary education in Kabarak primary school in Rongai County which is my ancestral home. After my primary studies I joined Njoro girls high school, after that I joined the Kenya institute of applied sciences to persue a diploma in applied science. I moved to Nakuru thereafter in order to find myself a job which I didn’t and decided to start farming business.

My farming business deals with planting of Tomatoes and vegetables. My business is situated in kabarak farm along kabarnet road, which I can say is a strategic location for my business as many people from the area and nearby kabarak university prefer fresh tomatoes and vegetables from the farm. ,as the price is favorable. I have been in the business for the past one and half year, the sell earn me a profit of Ksh 300per week . I started it with a capital of ksh 10,000 thousand shillings, which has increased as my output has continuously expanded. My biggest challenge being expand the piece of land for production and insect pest during rainy season. With your assistance I would increase my farm and also multiply my sales as I see great income in the coming future.

I wish to buy additional peace of land and prepare my new land by digging and fencing it and also buy more seedlings,so as I can meet my growing tenders to supply to the supermarket an institution, I also wish to start a poultry farming for my mum for her to be able to buy medication for herself since she is diabetic.

Ask Jepkurui a question about this loan project, share news and photos of your own, or send a simple note of thanks or inspiration.