Additional camera to my photo studio 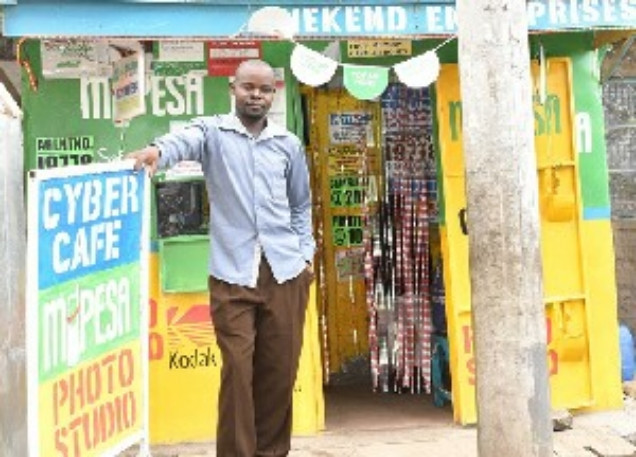 Good morning all members of Zidisha organization, My name is Alex Ndiema, a Kenyan Citizen by birth, 35 years old and a father of two children, we live in mbotela estate, Makadara sub-county, Nairobi County, Kenya. My permanent home address is; Trans-nzoia County, Saboti Sub-county, Machewa location, Bondeni village.
I went to Mt. Elgon Primary School and sat for my KCPE Examination in the year 1997, I passed well but was unable to Join Secondary School due to fee problem. I was forced to stay at home the whole year (1999). During that time I did some business (Photography, I remember borrowing a camera from friends on commission basis till I bought my own; Yashica, up to date I have that Camera for remembrance). I joined St. Marys Secondary School in the year 2000 and did my KCSE exam in the year 2003. I did well but was bot lucky to join university, I did some Computer packages in the year 2005, there after got a casual Job in industrial area; Sumaria Industries Limited where I worked for 5 good years.

In year 2007 I married and got a child, the cash I was getting was not enough to cater for my daily needs. I decided to venture into business with the little that I had saved, I starting from mandazi business, shop keeping, Cyber cafe with two computers and a printer (hp 3-in-one; scan, copy & print) The business had little or no competitor, so I grew up very fast, I had a lot of customers but few computers, it was not late to re-organize myself since I got introduced to Zidisha by a friend (Abigael), from there Zidisha took charge of my finances as far as business expense and assets are concerned. Right now I have a full Cybercafe, an equipped Photo Studio, an Mpesa and lastly but list, I have started doing supplies. Glory be to God and much thanks to Zidisha and my lenders.

I am going to buy a new camera (Nikon D3400) this will cost me around 439.47 USD. I am getting more outside/field jobs like graduation ceremonies, Baby Shower and birthday parties, so I normally go out with only camera that I have (Nikon D 3200) leaving the studio without any camera. So my boy is left behind stressed since the studio is also busy with a lot of clients. The remaining balance I indent to boost my Mpesa business float, this will ensure that during December holiday my girl will not run short of either float or cash to run the business.
I do expect an increment in profit by 14.65USD per week.

Ask Alex a question about this loan project, share news and photos of your own, or send a simple note of thanks or inspiration.