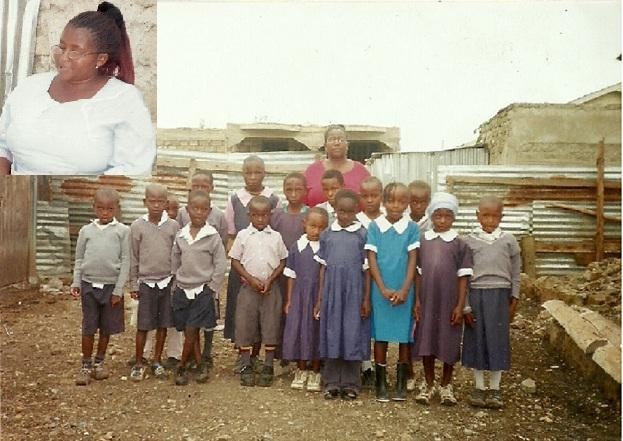 I am a Kenyan citizen, married with a boy and two girls. I have government training in early childhood development (ECD). I am currently pursuing my national diploma in ECD. I have worked in several private education institutions (Private School) since 1993 when I completed my formal education. My bitter realization was that many of our children cannot get quality early childhood education because the fees charged by these institutions are out of reach for our poor children.

This has led to many of our children seeking refuge in other backstreet informal schools set up by insincere business people whose objectives are to exploit the situation. These schools end up either not even paying its teachers in time or at all leading to very high rate of teacher turn over, there by denying the children the much needed continuity and consistency.

This made me quit employment from a private school situated in my current residential place. My main objective was to provide this much needed early childhood education to our poor children who were always being sent out of these schools for lack of school fees. I, in collaboration with other well wishers, set up a kindergarten named “The Terrian School”. We ask parents to pay a small fee (Kshs 500 or USD 5.5 per month) to help sustain teachers, who are more of volunteers. We, however, do not send any child away for lack of fees. Our children mostly come from poor parents who are either house helps or working as labourers around the estate.

It is in this background that I make this request for a loan (of USD 1,000 at interest rate of 10%) to facilitate the expansion of this Early Childhood Education Project, which provides educational opportunities for our poor children and employment opportunities to teachers.

The Terrian School:
Since the Kenya Government is currently not funding early childhood education, we saw it an obligation to work to assist the majority of our society whose children could not get better education. It with this background, that the idea to start The Terrian School was conceived. The school is situated in Utawala – Githunguri estate. Our children mostly come from poor parents who are either house helps or working as labourers around the estate.

Since inception of The Terrian School in January 2005, we dispatch an average of 30 pupils to standard one in public primary schools every year. The parents suggested that we incorporate lower primary school levels and in January 2009 we introduced standard one. Currently we have Baby Class, Nursery, Pre-Unit, Standards One, Two and Three, a pupil population of about 70, and four teachers. Our teachers are working as volunteers, being given a token of 3,500/= to 4,000/= a month, and are motivated by the fact that they give hope to those who were otherwise hopeless.

We have tried our best and our former children are doing very well in whichever schools they join.

Terrian academy is growing. We currently have a pupil population of 95. We expect this number to grow to approximately 150 by end of the month. We have 6 teachers, including me.
We have moved to class five. Due to shortage of room / classes, all pre-school children, numbering 30, are sharing one class while class 4 and 5 are also sharing one class. We also do not have an office.
The loan we are requesting from lenders, will be used to put up two more classes (to take class five and baby class) and an office.

Ask Theresia a question about this loan project, share news and photos of your own, or send a simple note of thanks or inspiration.