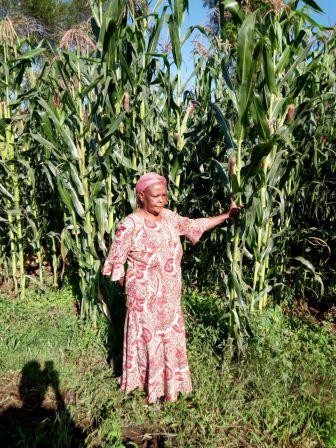 I come from Nakuru/Nyahururu I concentrate in farming and the proceeds are used for home improvement and payinng for education fees for my two grand children who live with me.The farming business has bee doing fine but at the moment things are not good but we hope for better tommorow

I am farmer I rear dairy cattle, currently I have three cows and 1 calf that is about to mature, I grow crops like Cabbages, Potatoes, Kales and tomatoes, in our 2 acres plus other 2 acres that I rent, which produce about 120 bags per year that is 360000 per year , wheat two acres which produce 100 bags per season which I sell 3500 per bag that is a total of 350000 per year. I also keep dairy cows which produce 30 litres per day @ 32 per liter that is 27000 per month and about 300000 per year so the total annual income is about 100000 per year. I use the amount to pay for my bills boost my business and buying fodder for my cows.

In my third loan, I want to concentrate with production of feeder crops, dairy feeds are expensive and having improved the breed and constructed cattle shed, my focus will be on how I can reduce the cost particularly on feeds. In 1 month, the cost of feeds is about 100 US Dollar(1 bag every week) I sell milk at US dollar 0.4 The cost of feeds are therefore high and reduce my income. If I cut on the cost, I will be able to save about US Dollar 50 on feeds only. In my 2 acre farm, I don’t cultivate annual crops since they take long without returns. I usually concentrate with short term cash crops e.g cabbages, Kales, Potatoes and Tomatoes. Maize production has greatly been affected by a mysterious disease which authorities have not addressed to date, so I decided to carry out wheat farming in a 4 acre farm that I have been renting in the past 3 years, after wheat harvesting I store the Hay for feeding my cows. I want to have additional 3 acres in which I will plant Oat and Lucern which I will plant twice in a year and store it to be used during dry spell, Months of January to May are harsh and dry. With enough feeds, milk production will be on the rise and am convinced that sales will be high hence high profits.