More computers and printer for cybercafé 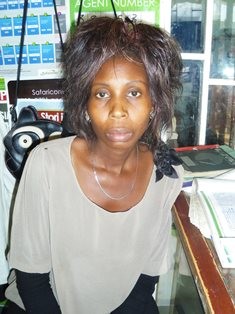 I Rose Joseph Mlunga was born on 31st of December 1986 at the old town of Kilimanjaro in Tanzania, i am the last born in our family of six siblings. i both attended by primary and O-level secondary school in Tanzania. Then after there i continued to pursue A-level secondary in Uganda. While in A-Level i performed very well in the senior six national examination, which earned me a change to study mu university degree in Uganda.
I pursued a university degree at Makerere Univeristy of Uganda, from 2006 August, until my graduation in 10th January of 2010 with a Bachelor of Arts in Economics. While i was still at Makerere n University got my boyfriend while i was in the second year. So we stared planning for our future so today an married to Frank Mageto and we live in Kenya., and we are blessed with one daughter.

i want to use the money to by buying computers and big printing machine ,and installation of internet FIBA

Ask Rose J. a question about this loan project, share news and photos of your own, or send a simple note of thanks or inspiration.