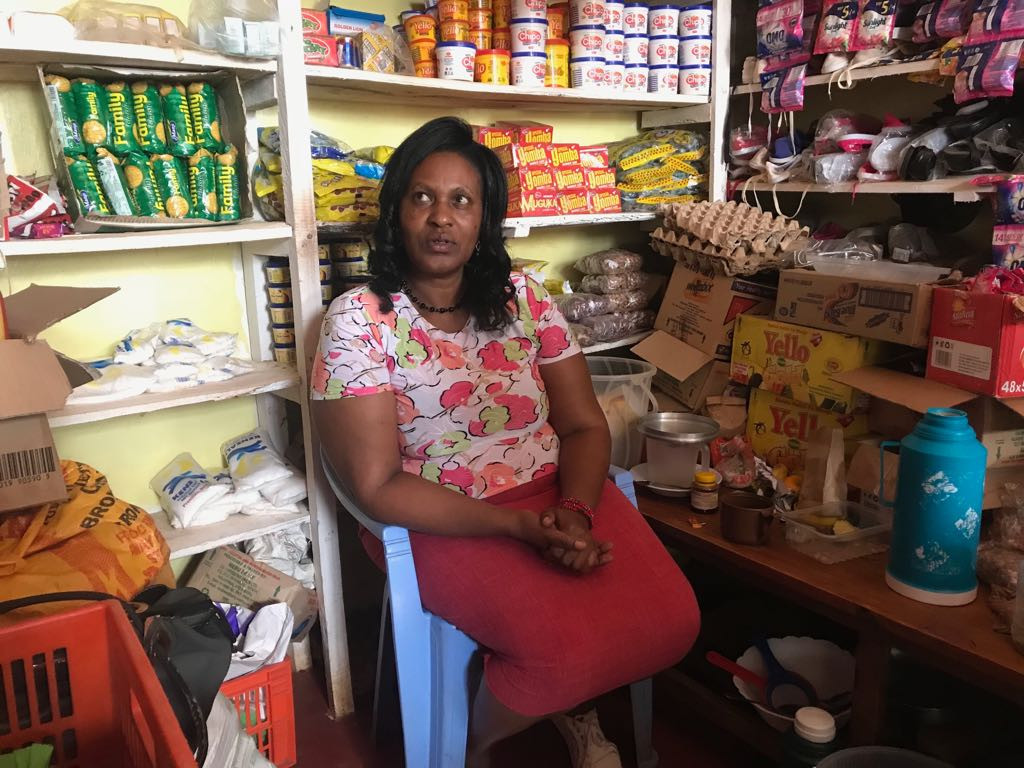 I was born in the Central Province of Kenya (Nyeri). My parents were peasant farmers with some coffee plantation, only, to tend to. It was challenging for them to guarantee us a decent lifestyle. However, despite these limitations, my parents believed in my education. They did their very best to ensure I went to school. It’s heartbreaking that they are not here anymore to witness the results of their hard work and faith in me, but wherever they are, am sure they are smiling and proud of their efforts.
I ended up a teacher, teaching in primary schools. I taught for over 25 years until I decided to seek early retirement to focus on making my small business work.
I am married with four children. My husband is a primary school teacher. Thanks to God, my eldest son secured a job and is working towards cementing his career. The second born has just started his small business. My third born is in his 3rd year of university. He has been helping me out so much over the holidays in running my cereals business. He is very interested in joining me after university to try and scale this business. My only daughter, the last born, is in her 1st year in the university. She's studying for a career in the tourism & hospitality industry. It has been quite a struggle educating my children, but it is with God’s glory that we have managed.
Zidisha was very pivotal when I decided to start my business. A business, for me, was not only a means of meeting the needs of my community and creating a source of income, but also a way of liberating myself and empowering more of the people around me. I have always had a passion for helping people in need. Throughout my teaching career, I have lived with and accommodated different persons and treated them as family; ranging from a few orphaned kids, a HIV Positive girl, a son of a single mother, to my nieces who needed financial support. I do not do all these because I had any adequate financial capability, but rather because I felt it was the right thing to. That is why I look at my business as a means of not only empowering myself, but most importantly, a way of empowering my customers and persons I care about. That is my passion.

My recent loan application was intended to purchase motorcycles, which would help transport my products to far-flung remote areas. I tested this distribution model first by leasing out a couple motorcycles to do the transportation for me. It quickly became clear that motorcycles wouldn't transport the bulk of my products as efficiently as I would have liked. I, therefore, looked for and acquired a second-hand Toyota Carina sedan car for about $1,500 (I paid $1000 in cash and the rest in 10 monthly installments). Well, it's a cranky old car but it did the job...most of the time!
I managed to distribute loaves of bread (Elliot's) to retailers in my countryside. The year wasn't so bad either. Although the Kenyan elections affected my business a little, I managed to forge ahead by the trust of my customers and by the Grace of God.
My retail business grew into a wholesale business, and I saw a need to establish another shop on the opposite side of the road. Currently, am dealing in foodstuffs including flour, cereal, loaves of bread, and beverages like sodas and juices. This being a pretty semi-arid area, foodstuffs have the greatest demand. I also introduced clothes and kid's shoes. Oh, and I managed to send my youngest daughter to university! All thanks to the business and you, Lenders!

Previously, people around my area have used charcoal and wood as sources of cooking energy. With the increased awareness of Global Climate Change, people have started leaning towards safer and cleaner energy sources. I intend to lead the change by introducing the use of Cooking Gas here. The demand has been on the rise, with a lot of customer requests. With my reputation for selling affordably, I should manage to get some sales going. As a result, I will be proud to create one additional employment opportunity!
I expect to make a margin of 13% from the sale of Cooking Gas cylinders and thereafter about 20% on Gas Refill services.

Ask Teresah a question about this loan project, share news and photos of your own, or send a simple note of thanks or inspiration.