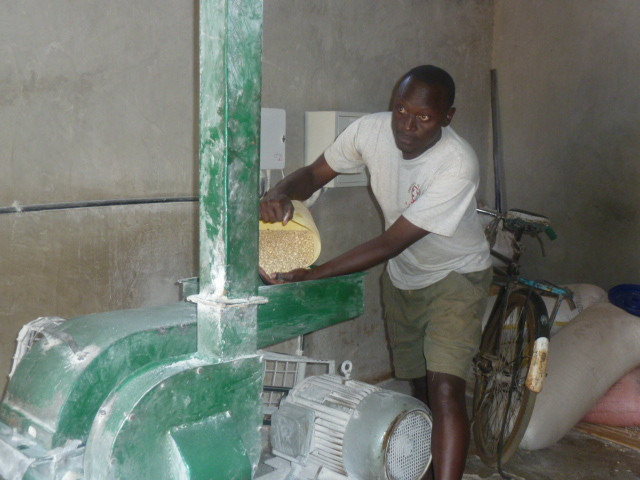 Storage and retail of maize and beans

I am Richard Matundura was born in Nyanza province in Kisii County .I was raised by my parents although now Iam orphan. I went through primary Education and passed to go to Secondary despite the posed challenge of school fees. My parents were peasant farmers and depended on farming and menial jobs thus denying me the chance to college or professional training instead I started working as a shamba boy to help support my parents .I managed to get money to join college through my little saving but by the time i was clearing, i had arrears so I didn't get my certificate. I had to hustle to pay my arrears and obtained my certificate. I also paid my computer studies, diploma and now doing my master degree in Kisii university

My business of selling Dry maize at my Posho mill . I had a dream of starting a posho mill but I didn’t have enough money to purchase maize. my first loan from Zidisha I used to set up a fish pod although did not pick up well due to water shortage challenges but I used the remaining money to start a maize buying and selling which picked up well enabling be to pay my loan well .i intend to get the Fourth loan to expand my maize business so as to make higher profits.i intend more maize and beans this year dry it keep in store up to a good season to selling.the demand for such products is high at my business now.I chose this type of business because iam able to manage easily and my customers are available.
my costs are posho mill repair and maintenance,salary for my workers,electricity and annual business permits .
My business profits are used mostly for savings,paying for my family needs and reinvestment for the future.

iam intending to but 25bags of maise and 20bags of beans this help keep my customers .Lokking at my market trends i know i will make a good business deal for the year to enable me pay my loan. iam exepecting my business to incerase by 20% in my profits .

my kind of business does not have seasons because are working to get food.food is essential that why iam tapping to beans for January onward because people near my place eat alot of Githeri.

Ask Richard a question about this loan project, share news and photos of your own, or send a simple note of thanks or inspiration.